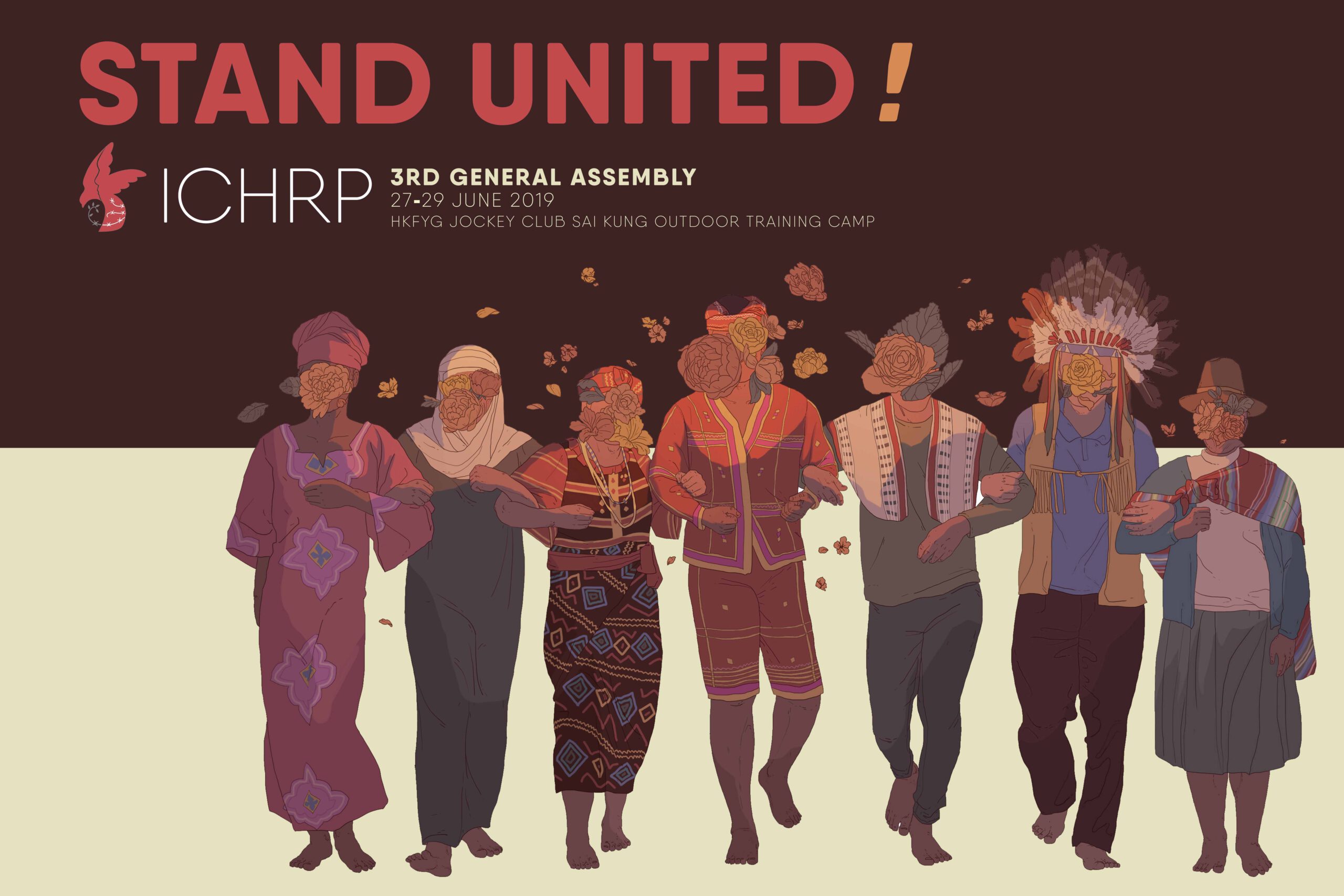 The 3rd General Assembly of the International Coalition for Human Rights in the Philippines (ICHRP) was held in Hongkong from 27 June – 29 June 2019 with the theme: “Stand United! In solidarity with the Filipino People for Justice, Freedom and Democracy!

The three-day event commenced with the presentation of a short video of ICHRP activities for the last three years and a song presentation led by Danny Fabella, National Council of Churches in the Philippines Theatro Ecumenical, Miss Agape Labuntog and cultural presentations from Filipino migrant workers under the direction of Dr. Rommel Linatoc.

Ma Wan Ki of the League of Social Democrats of Hong Kong welcomed the delegates, introduced the main speakers: Antonio Tujan, Jr., Luis Jalandoni and Peter Murphy, and encouraged the delegates to unite and fight against the US-Duterte Regime. He ended his remarks by thanking the Filipino people for his own life changing experience with them.

Antonio Tujan, Jr., the Director Emeritus of Ibon International, gave the keynote address for this General Assembly. He said that “In three years of the US-Duterte regime, the international community has moved from expectation for a popular albeit contrary presidency and the possibility of promised change especially with genuine change through peace talks towards disbelief over the rapid deterioration of political conflict and repression of the people reminiscent of the Marcos dictatorship.” In these conditions, ICHRP must expand and consolidate its membership.

The Opening Message from Luis Jalandoni of the National Democratic Front of the Philippines (NDFP) highlighted the history of violence under Duterte, the sabotaging of the peace process, abrogation of agreed upon ceasefire, and the termination of the peace talks. He projected the Filipino democratic movement’s call for “Oust Duterte”. Peter Murphy, Chairperson of the ICHRP Global Council, summarized the Philippines Human Right situation in which there is a new level of intensity, murders of HR defenders and murders in the “war on drugs”, and ICHRP’s work in sponsoring the International Peoples’ Tribunal in Brussels in September 2018. “The ICHRP has persevered and continue to grow and needs to stand united,” he added.

ICHRP Global Coordinator Angie Gonzales along with reporters from ICHRP Chapters outlined in detail the work undertaken by ICHRP over the last three years. These reports came from the US, Asia – Pacific, Canadian and Europe Chapters. Following the detention of Lumad leader Jerome Aba at San Francisco Airport in February 2018, and the massive US ICHRP protests, membership has rapidly increased in the USA. The huge Stop the Killings Bus Tour across the USA in the summer of 2018 followed, and a significant boost in Congressional lobbying on the Philippines took place. Canada reported on the successful anti-war conference, significant political lobbying and organizational expansion, and Asia-Pacific reported a series of protest waves over the intensifying murders of people’s advocates and in the “war on drugs”. In Europe much work took place for the Universal Periodic Review of the Philippines in the United Nations Human Right Council and in the very successful International Peoples Tribunal on Crimes against the Filipino People.

Plans for organizational expansion in the General Plan of action from the 2nd General Assembly were partially achieved, campaigns were implemented. The financial status of the coalition was assessed. The Global Secretariat was set-up in Manila just prior to the 3rd General Assembly.

The participants celebrated their achievement with an exuberant Solidarity Night with performances from different chapters, performers and the Hong Kong Migrant Workers Cultural Group.
Secretary-General of Karapatan Human Rights Alliance, Miss Cristina Palabay, shared horrendous stories of human rights violations of US-Duterte regime. These ranged from “nanlaban” murder stories, continuing Martial Law in Mindanao, illegal arrests and killings of activists, slandering of NGOs, to the full spectrum of Oplan Kapayapaan of the Armed Forces of the Philippines, and Oplan Kapanatagan of the Philippines National Police.

The 16 workshops on the second day raised awareness and developed unities on plan to further advance the solidarity and support for the struggling Filipino people. They passed important resolutions and approved major campaigns on their respective areas of concern. The results of the workshops were presented in the plenary and these were enthusiastically received and approved by acclamation.

The assembly also elected a new Global Council for the new term.

Amendments to the ICHRP Charter and By-Laws were also passed and a new logo approved.
The General Plan of Action for 2019-2022 was discussed and approved. Important components are the creation of educational materials, conducting research to provide campaign guidance to Chapters, consultation and unification between Regional and Country Chapters on collective international actions are among the plans of action that were approved in the assembly. A major priority is enabling and supporting UN, ILO and other international fact-finding missions to the Philippines, and developing a high-profile international day of action to Stop the Killings in the Philippines.

The General Assembly concluded with a Declaration of high level of emotional and practical commitment from participants to confront and overcome the scandalous abuse of human rights and international humanitarian law by the Duterte dictatorship with the overt support of the US, Australian, Canadian and Israeli government. ICHRP called on all possible social organization which uphold democracy and human rights to join it campaign and for more governments to join Iceland in publicly calling Duterte to account.