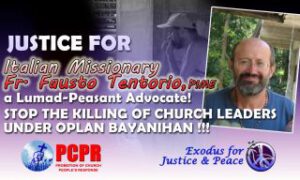 We are writing in earnest to our compatriots and friends abroad, please join us as we grieve for the murder of Fr. Pops Tentorio,PIME, a real apostle of the church, a priest of the landless, the oppressed, the lumads and peasants.

Together let us turn our grief into the strongest demand and movement for Justice for Fr. Pops and all victims of extrajudicial killings!

Fr. Fausto “Pops” Tentorio, PIME, 59,was born on January 7, 1952. He is an Italian Missionary of the Pontifical Institute for Foreign Missions (PIME).

Since then he has launched literacy and health programs/missions serving the indigenous peoples and farmers in North Cotobato. To date, there are 3,000 lumad and peasant scholars who benefit from his programs.

He has initiated a Health Program under the Tribal Filipino Program Centerfor Devt. Inc (TFDCI).

Fr. Pops is the Board Member of the Rural Missionaries of the Philippines Southern Mindanao and the Mindanao Interfaith Services Foundation Inc.

In 2003, Fr. Pops had a near – death experience with the vigilante group Alamara – Bagani, a paramilitary group which was created to eliminate progressive members and leaders of progressive organizations.

He was the compatriot of martyred Italian priest Fr. Tullio Favali, PIME who was slain by Edilberto Manero in 1985.

On October 17, 2011, Fr. Fausto Tentorio, PIME was shot dead in the compound of the Mother of Perpetual Help parish church in Arakan, North Cotabato at around 7:30 a.m., by two unidentified men wearing helmets.Fr. Tentorio sustained 10 gunshot wounds from 9 mm weapon. Doctors tried to revive him upon arrival at the Antipas Medical Specialist but to no avail. His wake lies at theMother of Perpetual Help Parish in Arakan, North Cotobato

Fr. Pops is the 56^th Victim of EXTRAJUDICIAL KILLINGS under the Aquino regime. He is the 1^st Roman Catholic Church leader slain under the Peace and Development Team of the Armed Forces of the Philippines.

Fr. Pops, since his near death encounter with the Alamara in 2003, had been getting death threats. Since then, Fr. Pops had been targeted under Oplan Bantay Laya’s design of eliminating alleged supporters of progressive groups. He was a staunch indigenous people (IP) and peasant advocate who supported the Genuine Agrarian Reform Bill (GARB) or House Bill 374. He was also an anti-largescale and foreign mining advocate

Most of all, Fr. Pops had lived the church’s credo:

“Speak up for those who cannot speak for themselves, for the rights of all who are destitute. Speak up and judge fairly; defend the rights of the poor and needy.” (Proverbs 31:8-9)

WHAT CAN YOU DO:

1. Join the Fact Finding Mission on October 18, 2011.
2. Join the “Justice for Fr. Fausto Tentorio Movement”.
3. Offer masses and prayers for Fr. Pops.
4. Join or launch prayer vigils and candle lighting drumbeating the call for justice and for the end of impunity under the P-Noy
regime.
5. Write the Aquino government,the Armed Forces of the Philippines(AFP),and the Philippine National Police (PNP) to demand justice for Fr. Pops and all victims of EJKs, and demand the dismantling of
Aquino-AFP’s Peace & Development Teams under Oplan Bayanihan.

STOP THE KILLINGS OF CHURCH PEOPLE & OTHER PEOPLE’S LEADERS UNDER OPLAN BAYANIHAN!