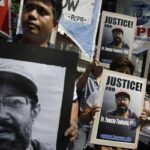 DAVAO CITY—The verbal tussle between the military and groups seeking justice for slain Italian priest Father Fausto Tentorio has continued, four months after the priest was murdered and even after the arrest of Jimmy Ato, whose confession had somewhat cleared the military of responsibility for the murder.

In his affidavit submitted before the National Bureau of Investigation (NBI) when he was arrested a few months ago, Ato said Tentorio was ordered killed by some landowners in Arakan, North Cotabato, who were hurting from the priest’s opposition to a hydropower plant project. The landowners were to gain from the project through compensation of their properties.

Italian priest Fr. Peter Geremia, a colleague of Tentorio at the Pontifical Institute for Foreign Missions, said, however, that suspicions about the military’s involvement in the death of the priest in October have deepened when it was found out that military assets were posted inside the Arakan parish compound at the time of the killing.

He said the deployment of the military assets has to be explained.

Geremia said while the gunman was shooting Tentorio, who was preparing to leave the convent for a religious meeting in Kidapawan City, also in North Cotabato, soldiers participating in a bayanihan (community) activity in a school across the Arakan parish compound ignored the fact that someone had just been murdered.

He said he had written Justice Secretary Leila de Lima to look into these facts and to ask the military why the soldiers did not rush to the scene of the crime.

“Let those soldiers explain why they failed to respond or to track down the killer,” he said.

Colonel Leopoldo Galon, spokesman of the military’s Eastern Mindanao Command based here, did not comment on the supposed deployment of military assets inside the Arakan parish compound on the day Tentorio was killed.

But Galon said the soldiers participating at the bayanihan activity were equally surprised as everyone else.

The soldiers, he said, did not respond because there was no military officer in the area to command them at the time of the killing. Besides, he said it was not the soldiers’ duty to respond to a crime incident.

Galon said he could not understand why the military was being blamed for the murder of Tentorio when the arrested suspect had already identified the masterminds.

As this developed, Catholics under the Diocese of Kidapawan lighted candles and attended a Mass on the fourth month of Tentorio’s murder.
Fr. Pol Paracha, head of the Justice for Fr. Pop’s Movement in North Cotabato, said the candles would serve as reminder for their undying love and continued quest for justice for Tentorio’s death.

Paracha also hinted that they were not contented with Ato’s confession when he said that they were hoping the national government would conduct a deeper probe of the Tentorio murder case. (by Germelina Lacorte, Williamor Magbanua, Inquirer Mindanao, Sunday, February 19th, 2012)