Survivor of Abduction and Torture Appeals to the UN

Remembering the Disappeared: Survivor of Abduction and Torture Appeals to the UN, International Human Rights Defenders Join the Growing Efforts to Seek Justice for Melissa Roxas 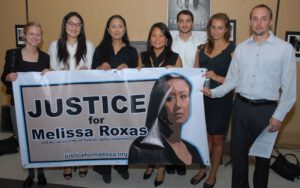 Los Angeles, CA – Commemorating the International Day of the Disappeared, over 50 human rights activists, lawyers, law students, church, women and youth activists gathered for an internationally-sponsored press conference for the Justice for Melissa Campaign. Melissa Roxas, a torture survivor who was disappeared for six days at the hands of the Philippine military, filed an official appeal to the United Nations Special Rapporteur on Torture, Professor Juan Mendez, to help remove roadblocks to her pursuit of justice.  Roxas filed the appeal to the UN Special Rapporteur on Torture with the support of world-renowned international human rights lawyers from the Harvard Law School International Human Rights Clinic and the law firm Schonbrun DeSimone Seplow Harris Hoffman & Harrison, LLP.

An influential panel of human rights defenders spoke out with Roxas to shed light on the continuing impunity in the Philippines and call for justice for all victims of torture and disappearance worldwide. Victoria Don, Esq., Schonbrun DeSimone Seplow Harris Hoffman & Harrison, LLP; Julie Gutman, Executive Director of Program for Torture Victims; Marvyn Perez, survivor of torture from Guatemala; and Rev. David Farley, Echo Park United Methodist Church, with the Justice for Melissa campaign, gave powerful messages of solidarity for the campaign to seek justice.

Many in the audience were moved to tears as they listened to Melissa share her experience as a survivor of government-sponsored abduction and torture in the Philippines. Roxas concluded her statement with a reflection on the experiences of other survivors and an invitation to help seek justice for all victims of human rights violations:

Jean Améry, an Austrian philosopher, who was detained and tortured in concentration camps, had said ‘Anyone who has suffered torture will never again be at ease with the world.’  Parts of me died when I was in that secret prison.  It has been a long road of recovery for me.  Even after two years since I was surfaced, I still have the scars and physical injuries from the torture.  And there are the invisible scars that you don’t see, memories that I have to live with forever.  But what gives me the strength to speak to you today is thinking about the many more people that remain disappeared, that continue to be tortured, and that continue to be killed.  They cannot be here with us today, and their absence fills this room and the world with a longing for justice.

Atty. Victoria Don, a member of the legal team assisting Roxas, explained the significance of Melissa’s pursuit of justice. “Ms. Roxas has actually pursued domestic remedies within the Philippines but to no avail. At this point, there is little recourse for her but to turn to international mechanisms for justice,” stated Atty. Don. “The current UN Special Rapportuer is Prof. Juan Mendez. As Special Rapporteur on Torture, he bears a specific mandate from the Human Rights Council. This mandate is to examine, monitor, advise and publicly report on human rights problems through activities including responding to individual complaints like the one Ms. Roxas has submitted.” Atty. Don and the legal team working with Melissa have called upon the Philippine government to:

1. Provide your office with copies of all records and other information pertaining to the investigation conducted by all government entities, including the AFP, CHR, the Philippine National Police and Bureau of Investigation, of Ms. Roxas’s abduction, detention, and torture;

2. Fully cooperate and ensure the full cooperation of the AFP in an investigation to determine the identity of Ms. Roxas’s torturers, including by allowing full access to Fort Magsaysay and providing copies of all relevant documents, including but not limited to entry and exit records and rosters of all AFP personnel and other persons and vehicles who entered, exited, or were present at the fort during Ms. Roxas’s abduction and in the seven days immediately preceding and following her captivity;

3. Investigate and prosecute all those responsible for Ms. Roxas’s ordeal, including any members of paramilitary groups, soldiers, military officers, and elected officials all the way up the chain of command; and,

4. Provide you an invitation to undertake a country visit to assist the government in identifying the causes of torture in cases such as Ms. Roxas’s, and to offer practical solutions to end the use of torture and other human rights abuses and ensure that the behavior of the AFP and other forces comply with international standards.

The Executive Director of the Program for Torture Victims, Julie Gutman, Esq, gave a moving message of solidarity on behalf of their organization. “I am honored to be here today to lend the full support of our human rights organization, Program for Torture Victims, to Melissa’s noble cause. She has channeled her own healing into becoming a strong spokesperson to end torture in the Philippines and throughout the world. She has also helped others who have been victims of torture to have hope to heal,” shared Gutman. Roxas sought the help of PTV two years ago when she returned home from the Philippines after being abducted and tortured. “For over 30 years, PTV has worked to rebuild the lives of torture survivors from over 65 different countries, people who have stood up for freedom, democracy and human dignity and paid a very heavy price.  We have seen firsthand the devastating consequences of state-sponsored torture in thousands of men, women and children. We are part of a critical growing global movement that seeks to banish the use of torture and today we add our voice loudly and clearly to support Melissa Roxas and all those speaking out about her shocking persecution at the hands of the Philippine military,” declared Gutman.

“Tragically, Melissa’s story is not unique. It is often those individuals like Melissa, who have the courage to stand up for the poor, to stand up for those have no voice, that become themselves victims of torture. We must stand with Melissa and all victims of torture as we confront those who violate the most fundamental laws of human decency, we must hold them accountable. Only by doing so can we truly work without torture,” concluded Gutman.

Torture survivor, Marvyn Perez, shared his experience of abduction and torture at the hands of the government when he was just 14 years old in Guatemala. “It has been 29 years of sharing my testimony, hoping to educate others about the evil practice of disappearance and torture, which usually come together. It is sad to find out that governments around the world still practice these crimes, these crimes which are usually denied or justified in the name of national security. Hundreds, if not thousands, around the world undergo torture. Unfortunately, most of them do not survive. Melissa and I are lucky to have survived. We have a moral responsibility to speak out and to seek justice. We share with all of you our stories but our testimonies could be meaningless if we don’t seek justice. To denounce a crime is not enough. We must do everything possible to bring to justice those responsible for the crimes. That is why I am here this afternoon, to show my support for the cause of Melissa Roxas and to all the torture survivors and victims of the Philippines. I join all the efforts to seek Justice for Melissa. I hope that in the near future we can see her perpetrators facing a trial and later sent to prison because even they have a right to a fair trial. Melissa, you must know that you are not alone, that many people are willing to walk along with you,” affirmed Perez.

Pastor David Farley, of Echo Park United Methodist Church, closed the panel with a song dedicated to the disappeared and the all those seeking justice. “I think that those of us who proclaim that persons are created in the image of God and that Creator loves them and values, have a tremendous obligation to live out that belief in solidarity with those who are having that image that they bear abused and disrespected and damaged. Those of us within the faith communities have a particular opportunity to help because we are both part of an institution that has access to levers of power that can have some kind of influence and we are present in struggling communities here and all over the world. Our presence, both in solidarity with struggling peoples and in access to those who have power over them, gives us a particular responsibility to act and to speak and to serve. And so many are. The United Methodist Church, has been strongly supportive of human rights, particularly in the Philippines and in support of Melissa and for many who have suffered torture.”

The program was concluded with a call to support Melissa Roxas and all victims of human rights violations. The Justice for Melissa Campaign has launched an on-line pledge for supporters to take and pass on to their friends and colleagues.

A copy of the Submission to the United Nations Special Rapporteur on Torture can be found at the International Human Rights Clinic of Harvard Law School.