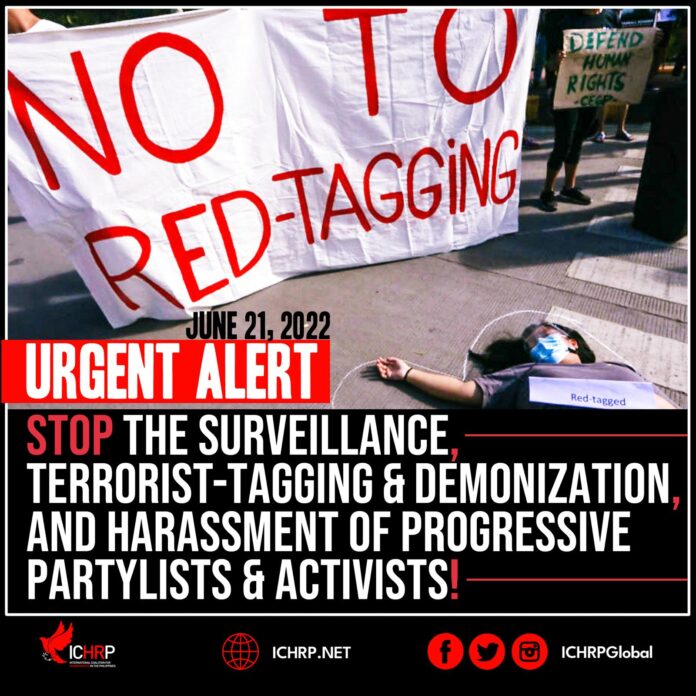 The International Coalition for Human Rights in the Philippines (ICHRP) urges the Duterte government to stop the surveillance, red tagging and harassment of progressive partylists and activists following a spate of post-election incidents. ICHRP likewise calls on the public, including the international community, to be vigilant and vocal against these continuing illegal acts by Philippine state agents.

ICHRP has received reports that on June 13, 2022, at around 8pm, freshly painted posters tagging as “terorista” (terrorists) and “demonyo” (devil) progressive partylist groups Kabataan, Gabriela, and ACT Teachers were thrown right in front of two buildings in Barangay Central, Quezon City, which house the national offices of various progressive organizations. One is the location of Kalikasan and the Center for Environmental Concerns (CEC). The other is that of Karapatan human rights alliance, BAYAN multisectoral alliance, National Union of People’s Lawyers, and Kodao Productions. In both instances, a vehicle was seen stopping by shortly before the staff saw the posters.

A few hours earlier, at around 4pm, two uniformed men were seen in the street, one of them taking photos in the direction of the Kalikasan and CEC office gate. Before this, on June 9, 2022, a plainclothes policeman knocked at the office asking if it was No. 260 Matulungin St (strange because the gate had a big # 26 on it) and looking for a certain individual and, after being told that they might have gone to the wrong address as such a person is unknown there, took a “selfie” with the caretaker. As the caretaker closed the gate, he saw that the policeman was accompanied by another and that they took the same police vehicle. This office has documented many instances of surveillance, red tagging, and even an attempted raid since 2018. CEC and Kalikasan are staunch advocates of the environment and the human rights of its defenders and have worked with eminent institutions such as the International Union for Conservation of Nature, the United Nations Human Rights System, and the Commission on Human Rights.

Previously, posters with names and pictures of Karapatan national officers were seen in streets in their office vicinity. Numerous other attacks by the National Task Force to End Local Communist Armed Conflict (NTF-ELCAC) were documented and brought to the attention of local authorities, the Commission on Human Rights, UN Special Procedures, and the UN High Commission on Human Rights.

“ICHRP, as a steadfast international solidarity network for the oppressed Filipino people, calls on the international community to speak out against the continuing surveillance, red tagging, and harassment and all other forms of intimidation and rights violations against activists in the Philippines, including the mass arbitrary arrest and detention on June 9, 2022, of 97 agrarian reform beneficiaries and advocates in the province of Tarlac, and the arrest of environment defender Daisy Macapanpan,” said Mr Peter Murphy, Chairperson of the ICHRP Global Council.

“We urge the Duterte administration to make his last few days in office clear of any form of rights violations of government critics.

“We urge the incoming Marcos Jr. administration to prove that the commitment to human rights accountability he assured to the United Nations is not just an ‘aspiration’. The President-elect can start with the abolition of the chief red tagger, NTF-ELCAC, and the repeal of the Anti-Terrorism Law (ATL). The NTF-ELCAC and ATL are tools of state terrorism against anyone and everyone who speaks out against anti-people measures,” said Mr. Murphy

“We hope that incoming National Security Adviser Dr. Clarita Carlos will work hard to do this, and to address the root causes of social conflict – by heeding the calls of the people, not with band aid solutions but with genuine national development,” concluded Mr. Murphy.