Stop the killings of indigenous peoples in the Philippines 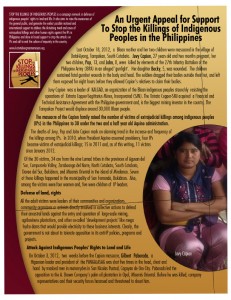 The non-recognition of indigenous peoples’ rights to ancestral land and to self-determination and the blatant violation of their civil-political rights remains dire to this day. This is characterized by the escalation of ancestral land grabbing by large-scale mining corporations and of ‘development’ projects and businesses such as plantations and dams.

There number of forced evacuation of communities, and of torture, extra-judicial killings and other human rights violations committed against indigenous peoples is also on the rise.

In this spate of violations, we are most alarmed by the significant increase in the frequency, and the worsened brutality, of extra-judicial killing of indigenous peoples in the Philippines. In the past thirty months under the administration of President Benigno Aquino III, we have documented 30 slays of indigenous peoples, which includes five indigenous children, mostly of leaders and members of organizations resisting various development projects and businesses encroaching on their ancestral territories. The killings were perpetrated by State forces, State-sanctioned paramilitary groups, and mercenaries.

Attached with this letter is an Urgent Appeal to Stop the Killings of Indigenous Peoples (URGENT APPEAL: Stop the Killings of Indigenous Peoples in the Philippines) to call the government’s attention to the rising number of extra-judicial killings of indigenous peoples. The Urgent Appeal asks advocates and supporters to send letters of concern to pertinent government agencies in the Philippines to put a halt to the brutal killings of indigenous peoples.

Your support will be greatly appreciated by the families of victims of extra-judicial killings and human rights abuse, and the rest of the indigenous peoples struggling for their ancestral land rights and to their self-determination. Please contact us through +632-4125340 and [email protected] for any concerns.