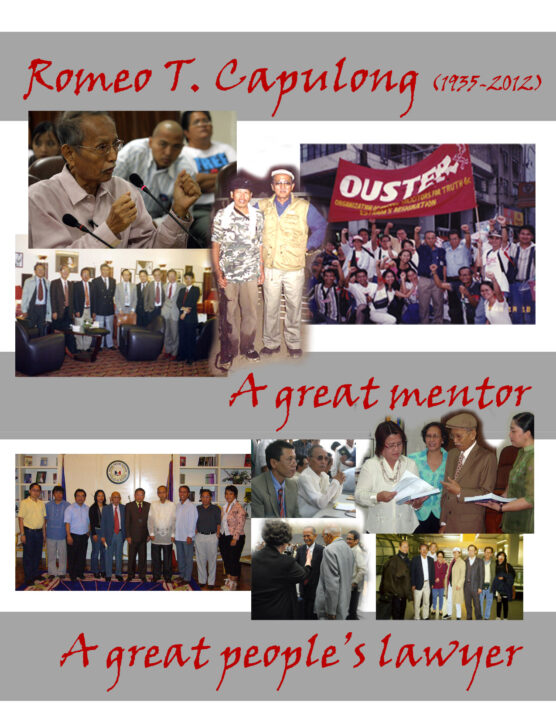 The National Union of Peoples’ Lawyers (NUPL), made up of generations of passionate lawyers and law students for the people deeply, mourns the passing of its much loved and admired founding chairman and chairman emeritus, Romeo T. Capulong at the age of 77.

Fondly known to us as RTC, he finally rested his case this evening, as if waiting until the conclusion of NUPL’s National Council meeting this afternoon on the ocassion of our fifth founding anniversary. He had battled a lingering illness and is survived by his wife Pia and three children.

His passion, selflessness, dedication, wisdom and vision inspired people’s attorneys and law students immensely, both here and abroad. As the first among us, he built an excellent example in both law and life for lawyers to follow.

RTC, son of a shared tenant famer, began to establish himself as an eminent legal scholar right out of the UP College of Law. He used his skills to defend the rights of the marginalized – the peasants, workers, urban poor, students, women, political prisoners, human rights defenders, peace advocates and other oppressed sectors of society – long before the idea of alternative lawyering secured a foothold in the Philippine legal system.

He represented the common man, the underdog and those who chose to fight back against an oppressive and exploitative system.

RTC’s devotion to his chosen clients was rooted in personal and professional solidarity. He handled public interest cases with the aim of effecting substantial changes, not simply quick relief. He took on suits litigation in behalf of basic sectors, driven by the desire to empower the people.

Our loss hence, is the people’s loss.

As a guiding pillar of NUPL, he ably and indefatigably guided – and still guides – us in our commitment to serve the poor, the exploited and the oppressed in our legal and metalegal struggles in different battlefields, goading us to push the parameters and serve the people.

His  ringing words will forever be etched in our hearts and minds: “After long years of experience as a people’s lawyer, I can honestly say it has been a treasured journey of self-fulfillment and rewarding achievement. I know it will be the same for all others who choose to tread this path.”

We fully concur beyond any shadow of doubt.