Rights groups call for prosecution of brains behind Burgos disappearance

“Niloloko niyo kami! Pwedeng kasuhan ang kamay ng krimen pero ang utak ay hindi?” (“You are deceiving us! Why are you only prosecuting the small-fry but letting the masterminds go scot-free?”) remarked Lorena P. Santos, daughter of a desaparecido and Secretary General of Families of Desaparecidos for Justice (Desaparecidos) at the picket held today at the Department of Justice (DOJ). 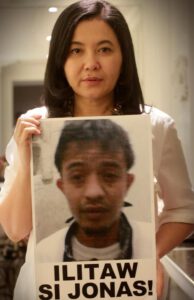 Santos referred to the 3 September 2013 resolution by the DOJ to drop military officials, led by Brig. Gen. Eduardo Año, from the list of respondents to the criminal charges of arbitrary detention, murder, and obstruction of justice on the enforced disappearance of Jonas Burgos.

The resolution, reviewed and penned by Assistant Prosecutor Gerard Gaerlan, and approved by Prosecutor General Claro Arellano, only recommended for the filing of charges against Major Harry Baliaga Jr.

Año was the head of the operating arm of the intelligence group of the Philippine Army when the abduction happened.

Cristina Palabay, Karapatan secretary general said, “the DOJ decision confirms our apprehension about the much publicized creation of the Inter-Agency Committee on extra-legal killings, enforced disappearances, torture and other grave violations on life, liberty and security of persons.  It is a shame that after announcing that it will give priority to the Burgos case, the DOJ, as the lead department of the Inter-Agency Committee, exonerated the brains of the crime and then covered up for Año’s responsibility and accountability.”

“If this is how the DOJ acts on its ‘priority cases’, how else would it act on the cases involving lesser known victims of human rights violations?,” Palabay asked.

“From the DOJ’s recommendation, we fear that the trial on the Burgos case will lead to a circus, but not to where Jonas is,” Palabay concluded.

The groups called on DOJ Sec. Leila de Lima to prosecute Gen. Año and other military officials removed from the respondents.