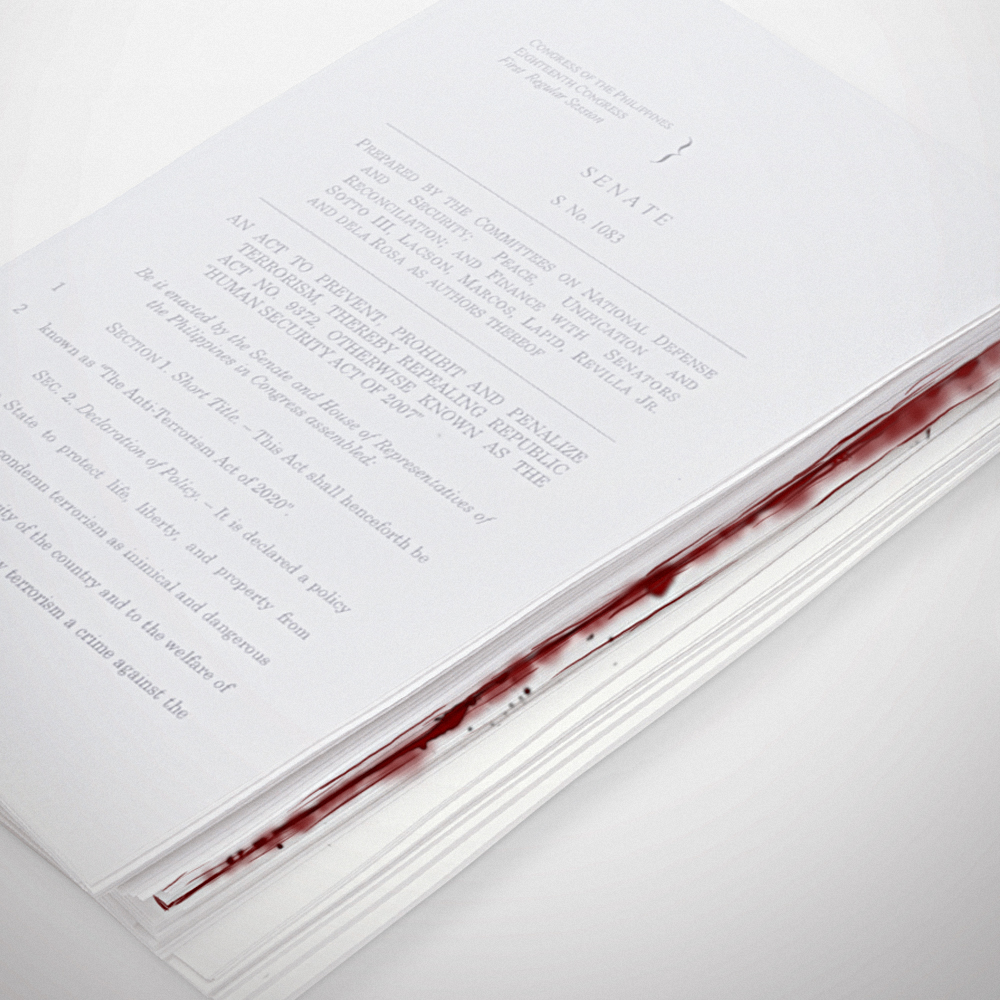 ICHRP-Canada is concerned that the new anti-terrorism law currently under debate in the Philippine Congress would allow longer detentions without charge which goes against habeas corpus protections and gives the executive branch more power to suppress dissent. Among the most repressive provisions are: warrantless arrest; 14-day detentions of suspected “terrorists”; and the creation of an anti-terror council that would determine what is terrorism and order arrests without a warrant – a function usually reserved for the courts.

The new bill also proposes 12 years of imprisonment for any person who “joins” designated “terrorist organisations or group(s)” as determined by the anti-terror council. The bill also removes a provision in existing law on payment of damages for wrongful detention, essentially giving impunity to the military and police to detain without fear of accountability.

The National Union of People’s Lawyers (NUPL) has condemned the bill as “sanctioned state terrorism”.  Given the government’s track record on vilification of political dissenters, anyone could be accused of terrorism.

The national human rights group in the Philippines, Karapatan, expressed concerns that the new law “will only embolden to commit more human rights violations with more impunity”.

Defence Secretary Delfin Lorenzana has defended the proposal, saying, “the people need not fear”, because there were civil liberties “safeguards” in place.  The defence ministers claims ring hollow in light of the release of a recent UN Human Rights report, June 4, 2020, documenting a culture of impunity in the police and military.

The UN report details a heavy-handed focus on countering alleged national security threats and illegal drugs resulting in serious human rights violations, including killings and arbitrary detentions, as well as the vilification of dissent.  The report’s authors identify persistent impunity and formidable barriers to accessing justice, which urgently need to be addressed.  The report, which was mandated by a July 2019 UN Human Rights Council resolution, noted that many of the human rights concerns it has documented are long-standing, but have become more acute under the Duterte administration. This has been manifested starkly in the widespread and systematic killing of thousands of alleged drug suspects. In addition, numerous human rights defenders have been killed over the past five years.

Given the failure of domestic mechanisms to ensure accountability thus far, the report stressed the need for independent, impartial, and credible investigations into all allegations of serious violations of human rights and international humanitarian law.

According to the report, despite a long-standing and robust tradition of human rights advocacy and activism in the Philippines, human rights defenders have been subject to verbal and physical attacks, threats and legal harassment for nearly 20 years. The report notes the vilification of dissent and attacks against perceived critics, which are “increasingly institutionalized and normalized in ways that will be very difficult to reverse.” The phenomenon of “red-tagging” or the labelling of individuals or groups (including human rights defenders and NGOs) as communists or terrorists has posed a serious threat to civil society and freedom of expression. Ongoing threats to freedom of expression, with legal charges and prosecutions being brought against journalists and senior politicians critical of the Government, as well as actions to shut down media outlets.

The report examined key national security laws and policies and their impact on human rights, particularly in the southern island of Mindanao and Negros Island, which have seen increased militarization through the imposition of emergency measures. The effect of this militarization – coupled with the long-standing presence of armed groups and the pressure by powerful landed elites and large business projects – is particularly dire on already embattled indigenous and farming communities.

The Canadian government should end all Canadian support to the Duterte government, including financial, socio-economic programming, tactical, logistical and training support, military sales and defense cooperation.

ICHRP Canada calls on the Canadian government to provide leadership in the international community to call the Philippine government to account for widespread and systemic human rights violations, and give substance to its own commitment to global human rights!