Butuan City – Seven (7) military men all armed with high caliber guns went to the barangay covered court in  Imadejas, Butuan City in the afternoon of March 23, 2012 where 350 dislocated lumad-Mamanwas has sought shelter.  The military men were led by Major Nilo Kanashiro, spokesperson of the 4th ID and Lt. Patrick Martinez, CMO of the 402nd Brigade. 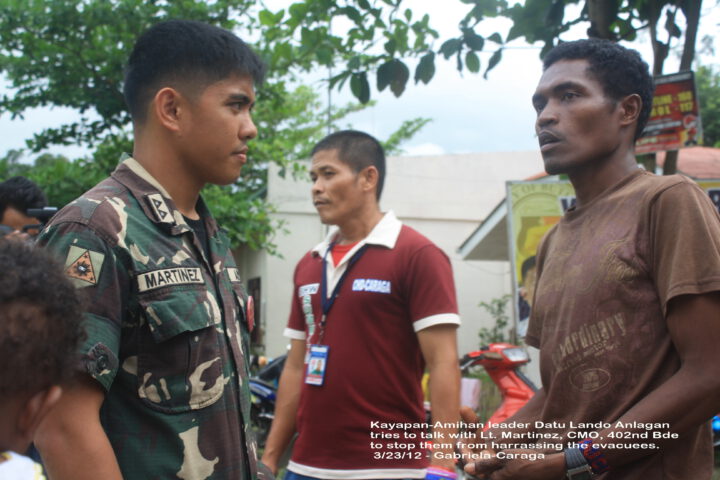 At around 2 o’clock 107 evacuees arrived from Palidan, Brgy. Mahaba, Cabadbaran City.  Major Kanashiro insisted that all the evacuees be photographed individually by the military before being allowed to enter the evacuation center. The evacuees, tired from hiding in the mountains to avoid the bombings and strafing, refused to follow the orders of the military and proceeded to join their fellow evacuees.
Several of the military men including Major Kanashiro and Lt. Martinez, disrespected the customs and traditions of the lumad people when, without permission from the datus (lumad elders and leaders) they entered the evacuation center. When Kayapan – Amihan leaders Datu Lando and Gingging Anlagan and members of Kasalo-Caraga tried to intercede, Major Kanashiro  brushed them off saying,  “We don’t want to talk to the handsome and beautiful people. ” He then proceeded to berate the evacuees and told them, “Do not listen to the lies of these pretty faces that has joined you.” He was referring to Kasalo-Caraga and Gabriela-Caraga leaders and other organizations helping the evacuees.   The soldiers told the evacuees to “Return home because there are no more troops in the mountains.“ Later that same afternoon, Lt. Col. Ferdinand Napuli, Commanding Officer of the 3rd Special Forces of the 402nd Brigade belied what Major Kanashiro told the evacuees when he announced in the local radio station Bombo Radio that they are continuing with the military operations.

“The actions of the military,  especially that of 4th ID’s spokesperson Major Kanashiro, exposes the lie that they perpetuate — that they respect human rights, ” said Ms. Hijos in reaction to the tense situation yesterday.  “If they cannot show common courtesy towards the lumad datus and local leaders in broad daylight,  in the middle of the city and in front of the media who witnessed their actions, imagine the total disregard for human dignity and terror tactics that they subject the residents of lumad communities in the isolated mountains.”, she continues.
“Terrorized by the bombings and presence of fully-armed men in their communities, risking their lives to seek sanctuary in Butuan City,  these evacuees have suffered enough.  Please stop harassing the evacuees and show some sensitivity to the women and children’s distress,”  concludes Ms. Hijos.#