MANILA – A farmer was shot dead in front of his child inside his house in sitio Narra, barangay Paquibato Proper in Davao City. 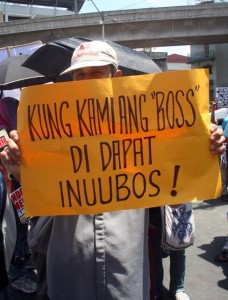 Labrador’s wife identified the perpetrator as Roberto “Kulot” Repe, a member of the Citizens’ Armed Force Geographical Unit (Cafgu). Two unidentified men served as Repe’s look out. Pedro Arnado, chairman of KMP-SMR said the other two were soldiers of the 69th Infantry Battalion under the command of the 1003rd Brigade.

Labrador was the seventh activist killed under the administration of President Benigno S. Aquino III. He was also the second victim of extrajudicial killing in Paquibato.

Arnado said Labrador was included in the Order of Battle because he was accused by the military of being a supporter of the New People’s Army (NPA). Davao region is one of the priority areas of the counterinsurgency program Oplan Bantay Laya (OBL). In 2000, B/Gen. Eduardo del Rosario of the 10th ID also declared that Paquibato district would be NPA-free by the year 2005 and subsequently armed a group of indigenous peoples to fight the NPA.

Arnado also said three days after the incident, men in uniform visited the wake of Labrador. “They went inside where Labrador was buried and intimidated the family. The family members were all terrified,” Arnado told Bulatlat in a phone interview. Arnado also said that since then, the victim’s house was always visited, if not surrounded by men in uniform or in civilian clothes.

Labrador’s wife sought the help of the City Council. Arnado said Mayor Inday Sara Duterte-Carpio and Vice Mayor Rodrigo Duterte said they would secure the family of the victim.

On Sept. 7, members of Padifa trooped to the City Council to attend a hearing on the two cases of extrajudicial killings and massive Cafgu recruitment of indigenous peoples in Paquibato.

On August 12, Julius Tamondes was killed while gathering their farm animals to evacuate to the village center when they were fired at allegedly by members of the Cafgu – Ata Tribal Association of Davao Inc. (Atadi) under Datu Ruben Labawan.

KMP and Pasaka, Pasaka, Regional Confederation of Lumad Organizations in Southern Mindanao, assisted the victims and supported their demands for the local government’s intervention in the worsening human rights situation on Paquibato.

Members of KMP-SMR strongly condemned the killing of two farmers in Paquibato. “Within a month, two lives have already been lost under the pretext of the ‘pangayaw’ declared by the Cafgu-Atadi under the direct command of Datu Limbuttong or BGen. Eduardo Del Rosario,” Arnado said.

Arnado also criticized the extension of the OBL saying that Aquino is worse than his predecessor Gloria Macapagal-Arroyo. “It has only been 72 days since he assumed the presidency and yet almost every week people are being killed.”

Arnado also said the root cause of the conflict in Paquibato is the issue of land. Labawan, the chieftain allegedly mobilized by the soldiers, is claiming the nearly 32,000 hectares of land that he plans to sell to a Canadian multinational company to plant jathropa, banana and palm oil.

Arnado also said the military is using the issue of land ownership to provoke dispute between Bisaya and indigenous peoples. The population of Paquibato is composed of 50 percent indigenous peoples and 50 percent Bisaya.. “In Paquibato, military- backed and influential indigenous groups such as the Atadi being led by Labawan, who hold land titles, stake their claim to the land by force to the point of antagonizing farmers who have tilled such lands for 25 or 50 years,” said Arnado.

Arnado also expressed alarm regarding the plight of the farmers in the area especially with the comeback of Del Rosario as 1003rd chief since last year. Recounting the heydays of the Alsa Masa in Paquibato in the 1980’s, he said, “B/Gen Del Rosario gained the stars on his lapel for his success in sowing disunity among lumads by creating the para-military group Alamara. Now he is poised to resurrect the same atmosphere of chaos and violence in Paquibato at the expense of civilian lives, no matter if they violate the peoples’ civil and political rights. Justice for the victims in Paquibato can only be rightfully given if the berdugos (executioners)in the AFP are sentenced to rot in jail.” (Bulatlat.com)