On the ninth death anniversary of Eden Marcellana and Eddie Gumanoy, families still cry for JUSTICE! Implement UNHRC resolution on the Marcellana-Gumanoy case and find and punish Palparan—Karapatan 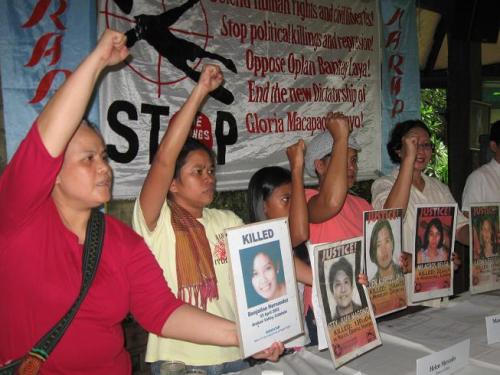 Media Release, April 20, 2012 – On the ninth year of Eden Marcellana and Eddie Gumanoy’s killing, Karapatan echoed the  call of the victims’ relatives and people’s organization for the P-Noy government to implement the recommendations of the United Nations Human Rights Committee (UNHRC) and seriously find and jail former Major Gen. Jovito Palparan, Jr. who is responsible for the death of the two. At the time of their death in April 2003, Marcellana was secretary general of Karapatan-Southern Tagalog Region while Gumanoy was chairperson of Katipunan ng Samahang Magbubukid sa Timog Katagalugan (Kasama-TK), a regional peasant alliance.

Marcellana and Gumanoy led an 11-person fact finding mission to look into a report of a human rights violation case in Gloria town in Mindoro, Occidental. After the mission they were waylaid by soldiers along the road and took Gumanoy and Marcellana and three others separately on April 21. The next day, the bodies of Gumanoy and Marcellana were found in a ditch in Bansud, Mindoro Occidental. The Butcher was then the commanding officer of the 204th Brigade of the Philippine Army in Mindoro.

According to Marie Hilao-Enriquez, chairperson of Karapatan, the Department of Justice (DOJ) “dismissed three times the preliminary investigation of the murder case we filed against former General Jovito Palparan, Jr., M/Sgt. Donald Caigas, M/Sgt. Rizal Hilario and others who were named and identified by survivor-witnesses in the killing of Marcellana-Gumanoy. These perpetrators and fugitives are the same triumvirate charged with kidnapping and illegal detention of Karen Empeño and Sherlyn Cadapan.”

The dismissal of the case at the level of the Department of Justice prompted the relatives of both Marcellana and Gumanoy to file a complaint in the UNHRC in March 2006. The victims’ relatives were represented by Marie Hilao-Enriquez and lawyer Edre Olalia of the International Association of People’s Lawyers (IAPL). On October 30, 2008 the UNHRC released its decision “finding the Arroyo government guilty of violating the right to life, right to liberty and security of persons and the rights of violated persons to effective remedies of the victims.”

Karapatan said that the Philippine government boasts of its being a signatory to the International Covenant on Civil and Political Rights (ICCPR). The Committee,  which monitors States’ compliance with ICCPR, found the Philippine government “under an obligation to provide the authors [complainants] with an effective remedy, including initiation and pursuit of criminal proceedings to establish responsibility for the kidnapping and death of the victims.”  It also ordered the Philippine government to: “take measures to ensure that such violations do not recur in the future”; “provide the complainants appropriate compensation”; and “submit, within 180 days (from October 2008), information about the measures taken to give effect to the Committee’s resolution.”

“But after 1277 days, a new president and hundreds more of victims of extrajudicial killings, the government has yet to act on the Views of the UN Human Rights Committee on the killing of Eden Marcellana and Eddie Gumanoy. We have exhausted all legal remedies here and abroad. The long delayed justice to the victims of rights violations could have given this government the impetus to seriously act on the rights violations cases; but it could not even find and jail  the fugitive human rights violator. Justice for the victims of rights violations remains elusive under the P-Noy administration as it was during GMA’s regime.  Thus, impunity continues to this day and the vicitms’ list becomes longer by the day,” concluded Hilao-Enriquez.  ###