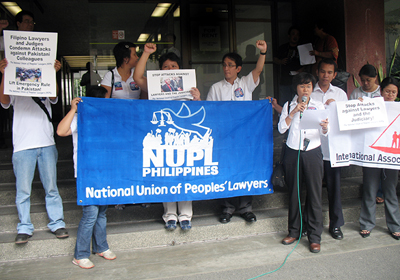 Forty years after Martial Law, it is anomalous and anachronistic to have political prisoners languishing in different jails all over the country. It is as if we are living in a time warp and have only gone from one form of state repression or intolerance to another.  A number of these political prisoners are NUPL’s direct clients and many are elderly, sick and women.

On the occasion of our 5th founding anniversary with a whole day fast, we shall deny ourselves  food, but this is a small sacrifice and symbolic gesture to demonstrate against the government denial of political prisoners their freedom.  The circumstances and even our frustrations compel us to not simply defend our clients, we stand by them as advocates in seeking truth and justice.

The NUPL expects close to 300 lawyers and 200 law students and paralegals in its 18 regional and provincial bodies/chapters to observe the fasting and to conduct jail visits in their own localities.

This trooping to jails across the country throws down the challenge to the Aquino administration to ensure that accountability and justice are delivered; rather than stand by and allow those falsely accused to suffer in prison.

The NUPL particularly notes that a President – who has all the powers at his disposal — cannot be the son of a father who was the foremost political detainee who was persecuted and has endured hardships  in jail and of a mother who has unconditionally released all political prisoners, and yet keep hundreds of political dissenters and innocent victims of state repression up to this time. It does not only not make sense, it is unacceptable, insensitive and callous. It is a continuing shame.

In concurrent jail visits across the country, NUPL highlighted the plight of political prisoners. In the conduct of its advocacy, NUPL has discovered that the alleged acts of prisoners are political in nature.  Only a slim minority of political detainees have been charged with rebellion.  In most cases, suspected political offenders are improperly charged with non-bailable ordinary crimes

The NUPL has assessed that most of these are actually improper, false or fabricated charges that further persecute these detainees, degrade their stature, and mock the basic rules of evidence. This is a travesty of justice on top of the multifarious violations of their rights including torture and harassment.

Indeed, when the lawyers start to take their cause outside the courtroom and into the streets and in the jails and elsewhere, the government must pause and take stock of things to come, sooner or later. By starting to put up the ante, the lawyers who are at the forefront of the court battles and part of the mass struggles  are saying that the traditional formulaic legal remedies under a supposed democracy have failed their clients, and ultimately, the people. #