No human rights in the mind of a corrupt, puppet, and fascist president

Today, human rights groups, victims and relatives of human rights violations and members of progressive groups bring before the public an image of a “jailed Noynoy” as a symbol of their desire to see the real-life Aquino in jail for his offenses against people’s rights.

Karapatan Secretary General Cristina Palabay said, “This should be the last commemoration of the International Human Rights Day with BS Aquino as the president of the Republic of the Philippines. Today, we denounce the regime’s ‘tuwid na daan’ (righteous path) and repudiate all those who exalt, and vow to continue, this blood-soaked  path—the road that has been the symbol of plunder and corruption and exploitation of the poor, of repression and fascist attacks, of criminal negligence, of puppetry to imperialist dictates, and of treachery and subversion of the will of the nation.”

Noynoy’s effigy, a beast-like being, depicts the regime’s terrorist attacks that weighed down people’s lives and livelihood. Despite this, Palabay said, “All through his almost six years in power, we heard nothing from BS Aquino but lies and falsehoods, mumblings and imaginary thoughts,  blame game, and defenses couched in silence.”

“The regime failed miserably in uplifting the lives of the poor majority of the people, pushing them deeper in dire poverty.  To top it all, people are killed, tortured, arrested and detained. To the regime, the Filipino people’s resistance is a stumbling block to its brand of peace and development, and they must be punished.”

Karapatan remembers clearly the words of the BS Aquino in his June 30, 2010 inaugural speech:“There can be no reconciliation without justice. When we allow crimes to go unpunished, we give content to their occurring over and over again.”

“Yet, rights violations happened ‘over and over again’, without let-up and with total brazenness and impunity. Sadly, the onslaught has become predictable. From Aquino’s fifth day in power, when Fernando Baldomero fell, the victims of political killings rose to 304; with 324 other victims who survived. From that day up to now, no one has been convicted and brought to justice,” said Palabay.

“Now, as we commemorate the International Human Rights Day, there are thousands of displaced persons in different evacuation centers who want to go home, but cannot because the Army and its paramilitary groups occupy their communities, homes, and schools; there are more than 500 political prisoners who are held in cramped jails all over the country for crimes they did not commit; there are hundreds of thousands who, in one way or the other, experienced the brutality of Aquino’s military,” she added.

Karapatan foresees an escalation of human rights violations as Oplan Bayanihan nears its end.  “While we brace ourselves for the regime’s intensification of military activities, we will keep close tabs on Aquino’s injustices and make certain that the real-life Aquino, just as his effigy, ends up in jail,”  Palabay concluded. 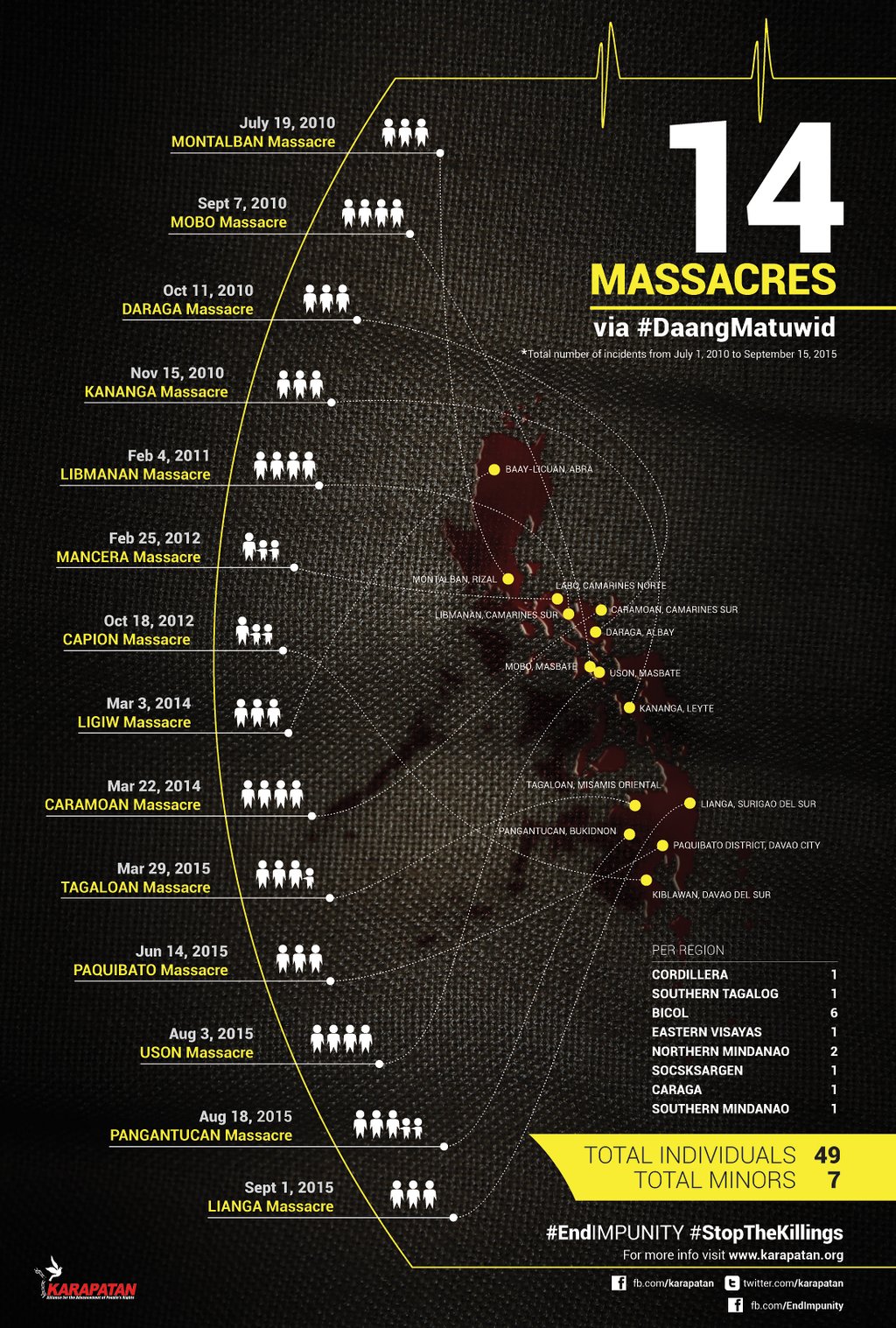