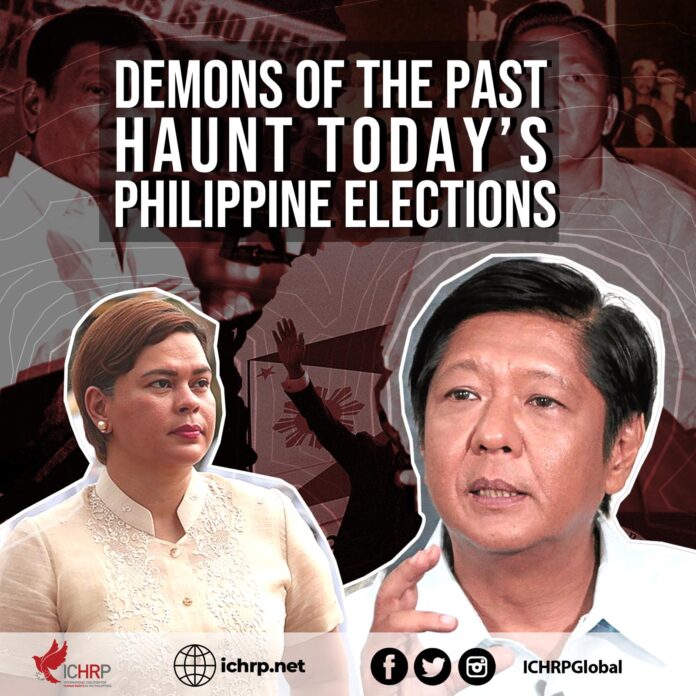 “The International Coalition for Human Rights in the Philippines (ICHRP) is deeply concerned about the prospects for free and fair elections tomorrow. Our International Observer Mission has recorded election-related murders, abductions, death threats, political arrests, massive red-tagging of government critics, and huge vote-buying since late January. But we also see a huge wave of support for democratic values and peace as the vote approaches,” said Peter Murphy, ICHRP Global Council Chairperson.

“We urge the international community, including global media outlets, to monitor these elections closely, to recognize the Filipino people’s effort to assert their civil and political rights in this election period, and to honour their decades-long campaign to ensure ‘Never Again’ to the crimes committed under the Marcos dictatorship,” said Murphy.

Filipinos are going to the polls to elect a new President and political representatives from all levels of government, from the local barangay to the congress and the senate. These elections will determine whether the future direction of the country continues President Duterte’s state violence and impunity, or shifts toward greater respect for citizens and resolution of the longstanding social and economic issues that plague Philippine society.

The world is watching the Marcos comeback with incredulity. Ferdinand “Bongbong” Marcos Jr. is the son of the ousted former dictator Ferdinand Marcos, who ran a 14-year military dictatorship that led to widespread and well documented human rights violations. The Marcos family is estimated to have stolen more than US$10 billion from the Philippines of which only a small portion was ever recovered. Bongbong’s running mate, Vice Presidential candidate Sara Duterte, is the daughter of the current President Rodrigo Duterte, making this campaign a political marriage of the families of the worst human rights violators in Philippine history. ICHRP is deeply concerned that a Marcos-Duterte victory will continue to provide legal and legislative cover for human rights violations and crimes against humanity.

Our International Observer Mission Bulletins, together with the Investigate PH reports of 2021, highlight the targeted and systematic repression of the Filipino people’s collective rights to peace, development and self-determination. Even the possibility of a return of the Marcos family to power exposes the negligence of national and international institutions to hold accountable perpetrators of crimes against humanity, and by extension their complicity in the human rights crisis in the Philippines.

After these elections, all democratic governments and organizations, including from the labour movement and faith communities, need to radically increase their support for Filipino democracy and the Filipino people who passionately want to restore it.