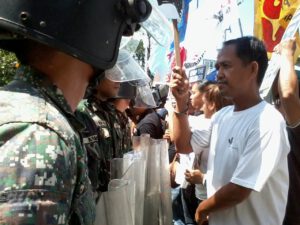 Press Statement,May 25, 2012 – “It remains to be seen whether Malacanang’s spin that there is a ‘significant decrease in the cases of extrajudicial killings’ will work before the international community when the government delegation faces the  2nd cycle of the Universal Periodic Review on May 29,” said Marie Hilao-Enriquez, chairperson of Karapatan. Hilao-Enriquez heads the delegation of the Phillippine UPR Watch, which is currently in Geneva, Switzerland in time for the GPH’s 2nd UPR.

Hilao-Enriquez added that Malacanang’s statement is doubly offensive to the rights victims, both under the Aquino government and that of Arroyo’s. “It has essentially exonerated former President Gloria Macapagal-Arroyo by saying that the decrease in the killings started in 2008, a period still covered by Arroyo’s  bloody counter-insurgency program, Oplan Bantay Laya. As per Karapatan’s documentation, there were 212 victims of extrajudicial killings. At the same time, it is shows utter disregard to the aspirations for justice of the families of the 76 victims killed under President Aquino.”

The first EJK victim under the present Aquino dispensation was Fernando Baldomero, who was killed five days after Pres. Noynoy Aquino’s presidential inauguration. Baldomero was an elected municipal councilor and coordinator of Bayan Muna in Aklan, Panay Island.  Ernan Baldomero, son of Fernando Baldomero, is among the members of the Philippine UPR Watch delegation. Ernan is expected to raise the issue of his father’s killing and the continuing rights violations under the Aquino government.

Meanwhile, Karapatan spokesperson Cristina Palabay said that, “the UPR Watch delegation has met with and is continuing its meetings with country missions in Geneva to discuss with them the submissions of the various organizations that constitute the Phil. UPR Watch. Issues that are highlighted in these submissions are extrajudicial killings, enforced disappearances, forced evacuation and eviction and other rights violations that are mostly related to large-scale mining operations, landgrabbing and the current government’s Public-Private Partnership (PPP).”  The UPR Watch submitted to the UNHRC a parallel and alternative report on the human rights situation in the Philippines. The delegation is set to meet several other diplomatic missions in Geneva as they gear up for the review next week.

“The GPH claims on the supposed decrease of killings and human rights violations in the past four years are one of the biggest understatements by the Aquino administration. With 76 victims of EJKs under Noynoy and zero justice for victims of human rights violations, the GPH has zero credibility when it speaks of its compliance to its political and civil rights treaty obligations,” Palabay commented.

Palabay said that some of the mission representatives “were surprised when they learned that rights violations continue unabated in the country as the Aquino government spew their deceptive rhetorics on human rights”  The UPR Watch delegation is “serious about getting our message across: that the Armed Forces of the Philippines, and the Aquino government in general, has zero credibility to claim that there are no rights violations in the country today,”  added Palabay.

Karapatan today held a rally at the Department of National Defense (DND) to underscore the fact that there are more than 26,000 victims of forced evacuation in the countryside due to military operations that include bombings, indiscriminate firing, strafing and harassment of people in the communities. Earlier, Karapatan expressed its intent to submit complaints to the UN Special Rapporteur on Internally Displaced Persons, specifically the recent evacuation in Mindanao, in areas where there is large-scale mining operations. ###
Reference:Marie Hilao Enrique,Chairperson, 0917-5616800
Cristina Palabay, Spokesperson, 0917-5003879
Angge Santos, Media Liaison, 0918-9790580
—————————————–
PUBLIC INFORMATION DESK
[email protected]
—————————————–
Alliance for the Advancement of People’s Rights
2nd Flr. Erythrina Bldg., #1 Maaralin corner Matatag Sts., Central District
Diliman, Quezon City, PHILIPPINES 1101
Telefax: (+63 2) 4354146
Web: http://www.karapatan.org