Press Release, July 23, 2012 – With his two years of presidency and three State of the Nation Address (SONA), Pres. Noynoy Aquino has peddled lies on the situation of human rights in the Philippines. He has been, in fact, inflicting terror and violence against the Filipino people. 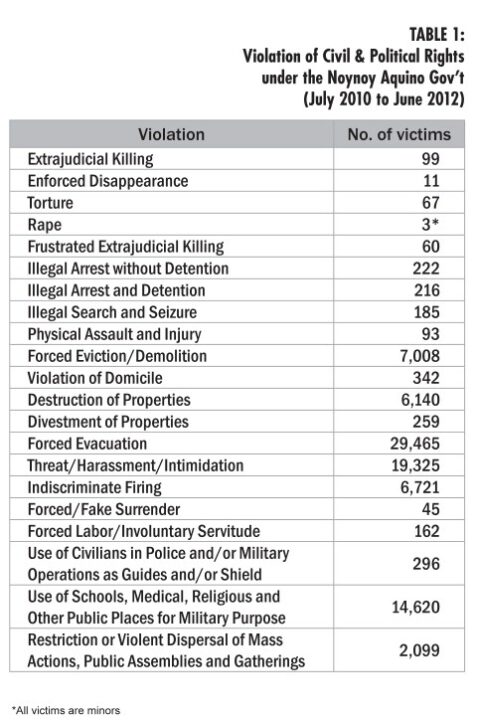 The second year of the Aquino administration is being punctuated with shamelessly deceptive slogans on economic development and human rights to prop up the administration’s image especially in the international community. But it is clear that the Filipino people have seen the truth behind the cacophony of these lies. The severe landlessness and hunger, the multitudes of jobless and the growing number of homeless are more stinging realities, more visible, more audible and felt than any other PR spin from Malacanang.  Thus, the growing number of impoverished Filipinos had no recourse but to resist and struggle.

This resistance and legitimate opposition, however, are met with repression and terror by Aquino and the Armed Forces of the Philippines through the counter-insurgency program Oplan Bayanihan. The bombs, the firing of guns, the killings are the government’s militarist ways to suppress and terrorize the people who refuse to be deceived and silenced.

In the two years of the Aquino administration, from July 2010 to June 30, 2012, Karapatan has documented 99 victims of extrajudicial killings; 11 victims of enforced disappearances; threats, harassment, and intimidation and forced evacuation of whole communities; cases of torture, rape, illegal arrests and detention, most are results of military combat operations being waged especially in the rural areas.

The series of attacks and violence against organized communities and human rights defenders and the latest wave of killings of human rights and environmental activists, like Romualdo Palispis, Willem Geertman and recently farmer Romulo Vaflor indicate the heightening terror and violence being instigated by state security forces and the Aquino government. This comes alongside the serious cases of rights violations brought about by militarization of organized communities especially in the Bondoc Peninsula; the violent demolitions of urban poor communities such as in Silverio, Paranaque, where guns were trained and fired at the barricading residents; the illegal arrest based on trumped-up charges against Makabayan coordinator and lay church worker Agnes Mesina; and the indiscriminate firing at the office of Bayan Muna in Catarman, Northern Samar.

To date, Karapatan has also documented the illegal arrest and detention of 107 individuals based on trumped up criminal charges, bring the total number of political prisoners to 385. The illegal arrest of consultants of the National Democratic Front continue with the arrest of trade union leader Reynante Gamara, while consultants Tirso Alcantara and Alan Jazmines are being subjected to inhumane and repressive conditions in jail.

Meanwhile, notorious rights violators such as Maj. General Jovito Palparan and several officials of the AFP and PNP remain untouchables from the bars of justice, as they continue to be coddled by the institutions and powers-that-be whom they serve. The Ampatuans who massacred journalists, lawyers and ordinary citizens have not been convicted, while former Pres. Gloria Macapagal Arroyo enjoys the luxury of a hospital detention.

In his SONA in 2011, he pledged to immediately pass the Marcos Victims Compensation Bill to give justice and indemnify the victims of rights abuses under the fascist Marcos dictatorship. He has yet to deliver on this promise, while many of the victims, like martial Law activists Maita Gomez, Romy Luneta and Bong Barsoles, had passed away due to illnesses.

This is the state of the nation under Aquino – where justice has not been served, impunity prevails and his terror and violence against the people resounds.#