PRESS STATEMENT, July 17, 2012 – A week before Pres. Noynoy Aquino’s State of the Nation Address (SONA), political prisoners from Luzon to Mindanao are conducting a one-week fast  to push the call for the release of all political prisoners. 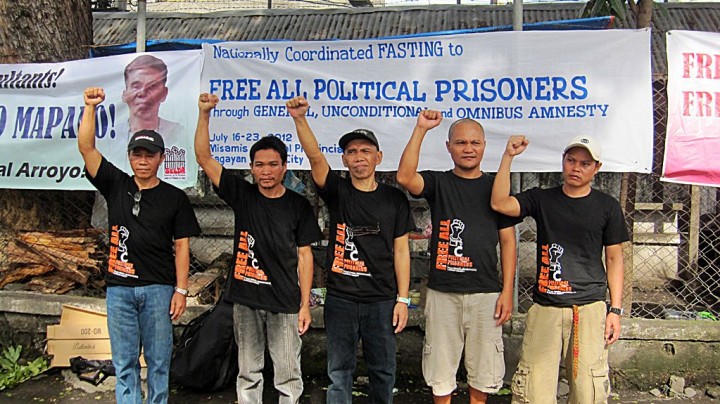 “It has been two years since we started to campaign and lobby for the release of political prisoners who are in various jails, but President Noynoy Aquino not only ignored our call but also arrested and detained 107 more farmers, indigenous peoples, leaders of organizations and activists, as well as suspected rebels. As of June 30, 2012, there are now 385 political prisoners,” said Marie Hilao-Enriquez, chairperson of both Karapatan and SELDA.

Karapatan said that Noynoy Aquino cannot just shrug off his shoulders, declare that he is different from the past GMA regime and blame it for all the ills besetting his “matuwid na daan” administration. He cannot go on pretending that there are no political prisoners in the country because “he is already responsible for detaining 107 activists based mostly on fabricated charges in the same way as Gloria did through the brutal Oplan Bantay Laya (OBL).”

According to Hilao-Enriquez, “Noynoy Aquino has his own brutal campaign against a people who organize themselves, assert and defend their rights to live decently. But like the GMA regime, Aquino has implemented his own campaign of suppression through Oplan Bayanihan which is actually just a continuation of the bloody OBL of the US-Arroyo regime.”

“This brutal campaign has resulted to 99 victims of extrajudicial executions, 10 victims of enforced disappearances, thousands displaced in communities classified by the military as rebel areas. All these happened during Noynoy’s two years, a picture no different from the GMA administration. It is no wonder that human rights violations, like the presence of political prisoners, continue to stalk our land,“ added Hilao-Enriquez.

Karapatan asserts that it would do well for Noynoy Aquino to take stock of his watch and not squander the remaining four years of his presidency.  Hilao-Enriquez said that, “he can still be the president who made good on his human rights commitments to the Filipino people. He can start this by releasing all political prisoners in the country through a presidential proclamation granting general, unconditional and omnibus amnesty to all political prisoners; or he may accede to the offer of the Philippine Ecumenical Peace Platform (PEPP) to “Release on Recognizance” the NDF peace consultants. The government should also immediately release the elderly, the women and those who are sick.”

Karapatan also enjoins all civil libertarians and freedom-loving Filipinos to echo the call for the release of political prisoners. “There may be no declared martial law but the same repression against the people and impunity prevail.  This must not be allowed to continue,” concluded Hilao-Enriquez.

Political prisoners in 10 detention facilities in Luzon, Visayas and Mindanao are on their second day of fasting. ###