AS THE NATION commemorates the first anniversary of the November 23 Ampatuan Massacre in Maguindanao, the national alliance of human rights groups, KARAPATAN, called for the dismantling of the Citizen’s Armed Force Geographical Units (CAFGU) and all paramilitary units used by political warlords as their private armies.  “Like other sectors, we in Karapatan, also express our sympathies for the families of victims of the gruesome carnage and our unity with them in their call for justice, one year after,” said Marie Hilao Enriquez, chairperson of the human rights Alliance.

“It’s public knowledge and an open secret that state-sponsored paramilitary groupsare being widely used by feudal warlords as a pillar of support for their political and landed interests to the detriment of human rights.  The Ampatuan massacre in which 57 civilians were killed, is a grim reminder of the prevailing culture of impunity surrounding these forces,” Marie Hilao-Enriquez added. 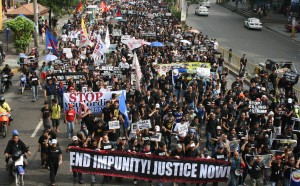 “It is high time that Malacanang consider disbanding these state-sponsored armed groups.  President Aquino, as head of state and commander-in-chief of the armed forces, should take the initiative in doing so.

The New York-based Human Rights Watch (HRW) released its own report this November entitled, “They Own the People: The Ampatuans, State-Backed Militias, and the Killings in the Southern Philippines,” calling for an executive order “banning all paramilitary and militia forces” and for the PNP and AFP to disarm them.

Aside from the CAFGU, the HRW recommended to ban and disarm Civilian Volunteer Organizations (CVOs), Police Auxiliary Units (PAUs) and even barangay tanods.  There are also tribal groups being used as part of the auxiliary forces of the military, such as Bungkatol Liberation Front (BULIF), Intergrated Tribal Defense Forces (ITDF formerly ALAMAKA), Bagani Force, Salakawan Force.  These have brought disunity in the tribal communities”

The AFP command has reportedly admitted that they cannot let go of the CAFGUs, otherwise their regular forces of ten divisions would be spread too thinly.  They repeatedly pronounced though the media that human rights would be respected.

“The AFP’s so-called respect for human rights has been belied by the killing of civilians Leonardo Co and his two companions in Leyte last November 15.  There are numerous cases pointing to the utter disregard of the AFP for human rights — from the martial law years to the present.  State-sponsored militias and even private vigilante groups have been used by the AFP time and again in committing grave human rights violations.  Banning and disarming them would be a good start in ending the culture of impunity in the country,” Enriquez said.

“Fundamentally, state violence has relied on US military support but is applied widely at the grassroots by local warlords through political patronage.  The nation and the world has seen the result of Macapagal-Arroyo’s coddling of the Ampatuans, if the Aquino government is really set to walk its talk of “daang matuwid”(righteous path) it must now stop state violence and terrorism at all levels.  It can start by doing away with the counter-insurgency programs and weeding out the armed militias of political clans as their base of support and conduit for war,” Enriquez concluded. ###