Karapatan calls for the enactment of anti-disappearance bill 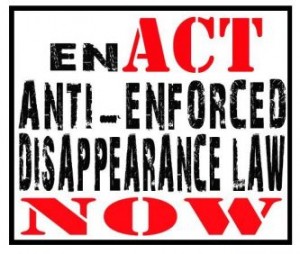 Press Statement, August 30, 2012 – As families and friends of the disappeared call for the surfacing and justice for their loved ones today, Karapatan challenged Pres. Noynoy Aquino to sign into law the long-pending legislation criminalizing the act of enforced or involuntary disappearances and penalizing state security forces and government officials involved in the perpetuation of such acts.

Cristina Palabay, Karapatan secretary general, said it is critical for Congress and Aquino to pass House Bill 98, as the 15th session draws to a close for the coming election. “The measure appears as ignored as the bill for justice and compensation for victims during Martial Law. With Gen. Jovito Palparan Jr., the butcher behind the abduction of Sherlyn Cadapan and Karen Empeño, still on the loose, these, and more, reflect the administration’s very low regard for human rights,” she said.

It is unfortunate, she said, that relatives of the disappeared continue to be haunted not only by their protracted search for their loved ones, but also with the continuing harassment of elements of the Armed Forces of the Philippines (AFP). Dr. Edita Burgos, convenor of End Impunity Alliance and mother of disappeared activist Jonas, was recently tailed again by alleged military agents, while hearings at the Court of Appeals and the Department of Justice on charges she filed against the perpetrators of the abduction of Jonas continue. 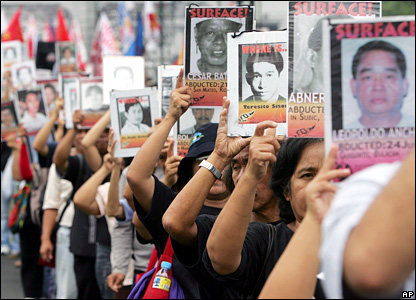 “Disappearances have continued to this day, with 11 victims under the Aquino administration. Such are still being perpetrated not only by the AFP but also by their paramilitary groups, such as the RPA-ABB. Jully Devero, Gerald Abale, Novito Gabriel, Michael Celeste, four farmers in Negros were abducted and are still missing because of the RPA-ABB’s role in the Aquino government’s counter-insurgency program,” Palabay commented.

Mercenary groups such as the RPA-ABB are included in the Social Integration Program under the government’s Oplan Bayanihan, and Executive Order 546, an Arroyo measure legitimizing the operations of paramilitaries and private armies, has not been revoked by Aquino.

“Aquino cradles these paramilitary groups to inflict grave violations such as disappearances. These are among the indications that Martial Law exists to this day, albeit without a formal declaration,” she emphasized.#