This June , as the International Day in Support of Victims of Torture will be commemorated on the 26th, UP Kilos Na!, Karapatan, All-UP Workers Alliance  and Tanggulan Youth Network are inviting you to join us in speaking against the unspeakable, to stand against torture and all forms of human rights violations. 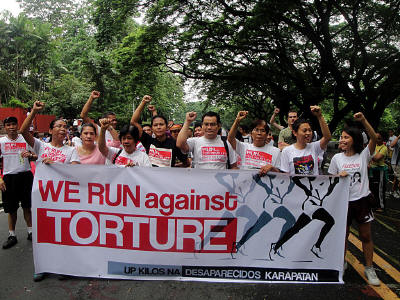 Torture continues to be employed by the state, to break the spirit, dignity and will of those it had deemed “enemies of the state.” This can be attested to by many political detainees and survivors of abduction who were subjected to cruel and inhumane acts by state security forces. Many had the determination and will to get over the physical and mental pain of their experience; still many need support for their continued healing.

Thousands who were disappeared were also probably tortured, while their families continue to be tormented with the uncertainty of their fate. To date, under the Aquino administration, there are already 96 victims of torture and 76 victims of extrajudicial killings, while 363 political prisoners continue to languish in detention centers. Nine have been forcibly disappeared.

Although the Philippines is a signatory to international human rights instruments such as the Convention against Torture, state security forces continue the use of torture and at the very least tolerates it, as none have been punished for violating the Anti-Torture Law.

This June, the human rights community will also commemorate the abduction of UP students Sherlyn Cadapan and Karen Empeño six years ago. While their mothers have continued their search for justice when they filed criminal charges against Maj. Gen. Jovito Palparan Jr. and his band of torturers, Palparan continues to evade the warrant of arrest issued against him amid the Aquino government’s lackluster efforts to arrest him. Palparan personifies the prevalent state of impunity in the country.

We would like to enjoin you to give tribute to the victims of torture and all rights abuses, and give voice to the call for justice and to end torture. We invite you to join us in “Run for your Life 2 (This is not a fun run),” an activity that aims to raise public awareness about torture, extrajudicial killings, the plight of political prisoners, human rights violations and the climate of impunity.

This will be the second time that we will lead this kind of activity, in coordination with other concerned organizations; the first was in 2011, dubbed “Run for your Life (This is not a fun run)”, and was participated in by Sunday joggers, runners and non-runners, bloggers, human rights activists, mainstream and alternative media and other concerned citizens. It was part of the campaign against torture and was held on the International Day in Support of Victims of Torture.

“Run for your Life 2 (This is not a fun run)” is also a part of the series of activities to commemorate the abduction of Empeño and Cadapan, who was also a sprinter/triathlete. To put a “twist” to the usual, there will be a “prison cell,” and participants will be encouraged to keep their eyes open for “Jovito Palparan”, whom they must capture by virtue of citizen’s arrest. The real Gen. Jovito Palparan Jr. is a fugitive who remains scot-free after he was served a warrant of arrest for kidnapping and illegal detention of Karen and Sherlyn. The run will also serve as a fundraising event to generate financial support for the ongoing legal cases against Palparan and all human rights violators, so donations for the run are very welcome. A short program will be held at the end of the 4.4K run, at the foot of the AS steps. We hope that you can join us on the 22nd. Please contact us through (00632) 4354146 (Karapatan Office). Thank you very much.

Release of Final Report of the International Observers Mission