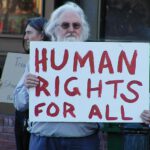 Pls. find attached and inline the statement of 2 international human rights lawyers organizations calling for the arrest and prosecution of Gen. Palparan, the filing of charges against former Pres. Arroyo and others for human rights violations, and the immediate release of political prisoners.

The International Association of Peoples’ Lawyers (IAPL), based in the Netherlands, was founded in 2000 and has members and observers in Europe, Asia, and South America. It is composed of human rights lawyers especially in countries where “imperialist oppression is most severe, the violations of human rights are most widespread, and the people’s struggle is most intense.”

The Progress Lawyers Network (PLN) of Belgium originated in 2003 as a network of progressive lawyers in Brussels, Antwerp and Ghent. It has defended union members and immigrants and engages in social law. It is a member of the International Association of Democratic Lawyers (IADL), an organization with members in 90 countries and has UN consultative status and is accredited at the UN Human Rights Council.

Other international rights lawyers groups from US (National Lawyers Guild), UK (Haldane Society of Socialist Lawyers), Japan (Japan Lawyers for International Solidarity and Action), France (Droit Solidarite’), and Canada (Lawyers Rights Watch of Canada), among others, have also manifested their intention to send statements and/or open letters to President Aquino on these matters in the next few days.

The International Association of People’s Lawyers (IAPL), an organization of human rights lawyers committed to the protection and advancement of the basic rights of peoples throughout the world, calls for the release of all political prisoners in the Philippines and the prosecution of human rights violators.

IAPL had high hopes at the inauguration of the newly elected President Benigno “Noynoy” Aquino II: he could be the one to make an end to the extrajudicial killings, enforced disappearances and torture under the Arroyo administration. He could stop the impunity.

19 months later, IAPL sees no major change in politics: human rights violations continue to this day. The perpetrators have practically not been effectively investigated, charged and tried, let alone punished.

Yes, former President Arroyo was recently arrested for cases filed against her for electoral sabotage, plunder and graft and corruption. But the present government has not shown any concrete and firm step to make her former administration liable for human rights violations.

On the contrary, it is the victims, their relatives, human rights defenders organizations and their lawyers that have initiated and are doggedly pursuing cases in courts, at great risk and difficulty… with no help from the government other than its general rhetoric.

There are still 356 political prisoners in the Philippines and quite a number of them were illegally arrested through the improvident substitution of generic John or Jane Does without hearing.

The Aquino government should show its respect for human rights by taking concrete actions, instead of just speaking about it.

A first and necessary step is to free the political prisoners, to free the people detained and imprisoned for fighting against oppression and to struggling for fundamental changes, against a corrupt regime.

Impunity for human rights violators and punishment of those who have different political beliefs, that’s called plain injustice.

IAPL urges the Philippine government to

–       release all political prisoners in the Philippines, immediately and unconditionally;
–       take prompt action, to investigate and resolve administrative, civil and criminal cases against former President Gloria Arroyo and her top civilian, military and police officials led by retired Major General Jovito Palparan Jr. for serious human rights violations
–       leave no stone unturned in capturing and arresting Gen. Palparan and answer for his many crimes including the disappearance, torture and rape of 2 university students

For many years PROGRESS Lawyers Network has been monitoring the human rights situation in the Philippines, and we have been taking firm position against the extrajudicial killings, disappearances, torture and other forms of human rights violations under the previous administration.

As a member of the International Association of Democratic Lawyers (IADL) we were present at the COLAP V Conference in Manila in 2010. The Manila Declaration stated: “The conference stressed the need to end impunity for perpetrators of human rights violations and supports efforts to insure that those governments and individuals responsible are held accountable.”

The newly elected President Aquino has not made any concrete step to do address the impunity even after 19 months in office. Only recently his administration has filed cases for electoral sabotage, plunder and graft and corruption against the former President Arroyo which resulted to her arrest and detention.

But the present government has not shown any serious step to make her former administration liable for human rights violations like extrajudicial killings, disappearances and torture. On the contrary, the same situation seems to continue.

The victims, their relatives, human rights defenders organizations and their lawyers have initiated cases in courts, at great risk and with many difficulties, on their own, with no help from the government.

President Aquino had appointed the previous chair of the Commission on Human Rights, Mrs. Leila De Lima, to be his Secretary of Justice. With all her expertise and her criticism against the human rights policy of the Arroyo administration, we had expected her to prosecute the main human rights violators. What is the Aquino administration waiting for?

While there is still impunity for former President Arroyo and retired General Palparan, 356 political prisoners are still detained. Against them, cases can be brought up quickly, charges can be false or improper, they can be arrested quickly and often illegally, even if they have not been heard properly and their case is only based on declarations of unidentified witnesses or confessions after being tortured. They are often incarcerated for years without a fair trial, because of their political beliefs.

We had expected more from President Aquino, whose father was a political prisoner himself.

PROGRESS Lawyers Network of Belgium calls for:
– the release of all political prisoners in the Philippines through a general, unconditional and omnibus amnesty; and
– prompt action, investigation and resolution of administrative, civil, criminal cases against former President Gloria Macapagal-Arroyo and her top civilian, military and police officials led by retired Major General Jovito Palparan Jr. for serious human rights violations
-immediate capture and arrest of Gen. Palparan and bring him to court for trial for the disappearance of university students Cadapan and Empeno, among others.