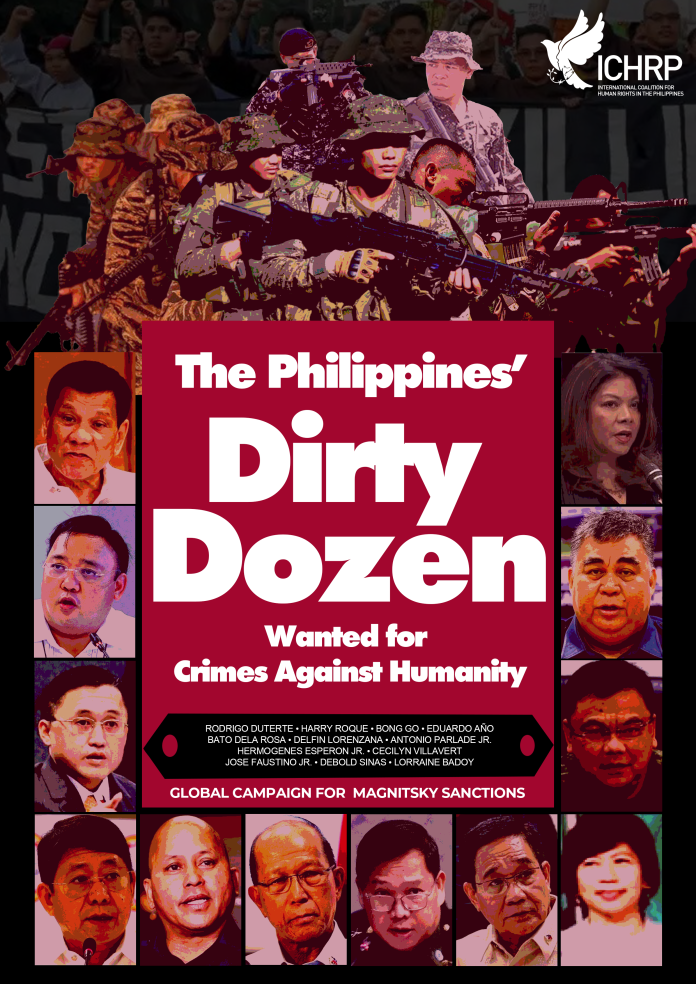 “The state of terror created by the Duterte regime is at the heart of this sanctions campaign. There is overwhelming evidence that the Duterte government has been responsible for the deaths of tens of thousands of people. National governments must act to sanction those who commit serious human rights violations to hold the architects of this terror to account” – Senator Janet Rice, Australian Greens.

Today the International Coalition for Human Rights in the Philippines (ICHRP) launched a global Magnitsky Sanctions Campaign Against Philippine Human Rights Violators. The purpose of the Magnitsky Campaign is to work with national governments in Australia, Canada, the United States, the United Kingdom and the European Union to hold human rights violators accountable. Magnitsky sanctions range from travel bans to targeted financial sanctions against individuals who are “perpetrators of egregious acts of international concern”.

The Magnitsky Laws call for sanctions against any foreign nationals responsible for violations of internationally recognized human rights in a foreign country when authorities in that country are unable or unwilling to conduct a thorough, independent and objective investigation of the violations; the law provides for the taking of restrictive measures in respect of foreign nationals responsible for gross violations of internationally recognized human rights.

The Magnitsky campaign is a direct follow up to the work of the INVESTIGATE PH Commission of 2021 which identified patterns of gross and systemic human rights violations including crimes against humanity perpetrated by the Duterte Regime.  In the absence so far of genuine accountability for these crimes through international mechanisms, such as the International Criminal Court and the UN Human Rights Council, ICHRP is launching a global campaign under national Magnitsky Acts to hold those responsible accountable for these widely documented crimes.

The sanctions campaign targets 12 individuals who were either

From across the globe ICHRP has received expressions of concern about the Human rights situation in the Philippines. Former Senator Lee Rhiannon of the Australian Greens noted that “…from Australia we have watched with concern the unfolding human rights tragedy in the Philippines. With frightening efficiency, the Duterte government has unleashed a state terror on the Filipino People routinely committing rights violations. The institutions that are supposed to uphold the law have given a free pass to the violators ensuring none face consequences. In the absence of justice, in the absence of domestic and international accountability, the proposed Magnitsky measures would afford some level of justice for those guilty of these heinous crimes.

Canadian Rev. Dr. Christopher Ferguson, the past Secretary General World Council of Reformed Churches, expressed similar concerns “…the Duterte regime has been a serial human rights violator committing crimes against humanity. Its war in Mindanao against the Moro People, in addition to its wars on terror and dissent have killed thousands. There is as yet no accountability for this state of terror. Those responsible have not faced justice. The least that can be done is to have states with Magnitsky Laws stand up and bring a small measure of justice to the perpetrators of these crimes.”

Through the Magnitsky Sanctions Campaign ICHRP will work with national parliaments and legislatures to take appropriate measures against these individuals for their planning, participation and responsibility for crimes against humanity.

Media inquires can be sent to: