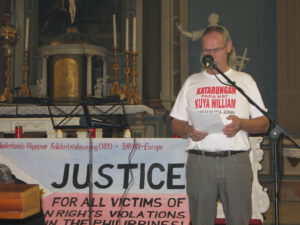 Amsterdam, The Netherlands – The Old Catholic Church in Amsterdam overflowed the other day, July 15, Sunday, with hundreds of Dutch, Filipinos and others, who joined the family members in a memorial and tribute to Dutch peasant, human rights and anti-mining advocate Willem Geertman who was killed by suspected military assassins in central Philippines last July 3.

Geertman, 67, was killed by motorcycle-riding men as he arrived in his office in Angeles City, Pampanga in central Philippines. Geertman was a staunch peasant rights, human rights and anti-mining/logging advocate. He had spent more than 30 years of his life in the Philippines, serving the poor peasants and indigenous people in Central Luzon.

The memorial service, organized by the Justice for Willem Geertman Campaign, began with a warm welcome from Rev. Fr. Dr. Peter-Ben Smit, parish priest of the OCC in Amsterdam. The mood of the afternoon was set with the heart-warming rendition of the Filipino choir who sang about martyrdom for the people’s cause.

According to Toon Geertman, a brother of Willem, who just arrived from Manila with sister Maria, Willem’s final resting place was under the shade of a mango tree. He defiantly remarked that for justice for Willem to be achieved, everyone concerned must break the silence and defy those who wish to silence the voices asking for justice and human rights. 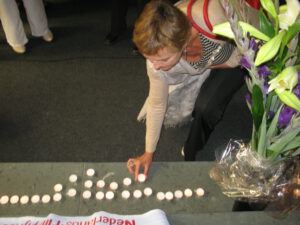 Toon shared with the audience the very warm reception and love they received from the colleagues and the people whom Willem worked with in the Philippines. He said he saw and heard how people loved his brother so much, as they watched over his wake and told him and his sister stories about how Willem worked with them. He also said he was so much overwhelmed by the people’s support as they lined up the streets as the funeral car carrying Willem’s remains passed by enroute to the Baler Catholic Church where 8 priests concelebrated a mass in honour of Willem.

He reiterated the Geertman family strongly believes that Willem was a victim of extrajudicial killing. He shared that during his brother’s wake and funeral there were unidentified persons taking photos of the activities.

A video presentation prepared by the colleagues of Willem, who was executive director of the Alay Bayan Inc., a farmer-support and disaster response institution, showed Geertman among the people whom his projects served.

Theo Droog, chair of the Nederlands-Filppijnse Solidariteitsbeweging (NFS), paid tribute to Willem as a humble human being who embraced the poor and marginalized in the Philippines, the country he considered his home. Droog also presented a stone painted by an artist-friend and offered to the family of Willem as a gesture of honour to him and his various advocacies.

Manon Kant, who spoke in behalf of the Rotterdam community, where Willem took on a job as a worker and became active in the workers’ movement there, said Willem’s heart was always with the oppressed and exploited, and his search for answers to end such oppression took him to the poor farmers’ and indigenous communities in the Philippines.

Ton Groeneweg of the ‘Mensen met een Missie’, said Willem made the ultimate sacrifice, that of offering his life for his fellowmen, a vision shared deeply by Willem and his mission.

Nanette Hogervorst of ‘Amnesty International’ and Angelica Gonzales of the ‘International Coordinating Committee for Human Rights in the Philippines’, who both delivered responses, vowed to work harder for justice for Willem and for all the other victims of extrajudicial killings and other human rights abuses in the Philippines.

Maria, a sister of Willem, presented the various projects that Willem was busy working on at the time of his death. She said the Geertman family firmly supports Willem on his various projects and vowed to continue such projects through a foundation which was established for Willem. She appealed to the audience to join them in supporting and continuing Willem’s project by contributing to the collection. 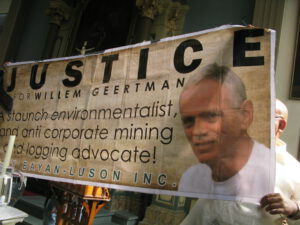 Members of the Filipino community read offertory prayers calling for justice for Willem, a stop to extrajudicial killings and to all human rights violations and an end to impunity in the Philippines.

Everyone present joined the lighting of candles and offering of flowers in front of the church altar where Willem’s photo was displayed and large banners which state: “Justice for Willem and for all victims of human rights violations in the Philippines”, “Justice for Willem Geertman – staunch environmentalist and anti-corporate mining and anti-logging advocate”. As the name of Willem Geertman and other victims of extrajudicial killings were called out, the crowd responded in one voice – PRESENTE! MABUHAY!#