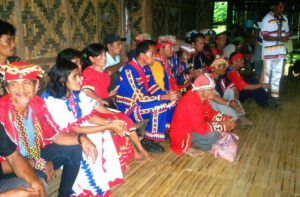 Media Advisory, 29 June 2012 – Manila, Philippines – Residents of Bagocboc and Tingalan in Misamis Oriental, Mindanao, particularly those affiliated with Pangalasag – a local organisation of indigenous Higaonons which has been very vocal against the establishment and expansion of a palm oil plantation in their area, continue to face injustice at the hands of the government authorities.

Pangalasag members reported that local police force have warned them of being prosecuted if they join any actions against A Brown Company, Inc. – the company behind the palm oil plantation in Opol. The local police also took photographs of the Pangalasag members’ houses, which is a clear form of harassment to instil terror to those who dare oppose the palm oil operations. Furthermore, a relative of a Higaonon elder was one of the labourers retrenched by the palm oil plantation immediately after the company found out his affiliation to Pangalasag.

According to Jomorito Goaynon, chairperson of Kalumbay Regional Lumad Organization which has been part of the recently held international fact-finding mission (IFFM) led by Pesticide Action Network Asia and the Paficic (PAN AP), “It is very clear whose side the local government of Opol is siding to. A Brown is also keen on not showing any respect to our indigenous culture and life.”

Sr. Ma. Famita Somogod, MSM, coordinator of the Rural Missionaries of the Philippines – Northern Mindanao Sub-Region added that “While trampling on the right to land of the indigenous peoples concerned, A Brown is also pushing the human rights and fundamental freedoms of the community into the state of disgrace.”

The Provincial Environment and Natural Resources Officer also admitted that A Brown has yet to secure a permit after already operating for two years. Goaynon said that they fear that the environmental department (DENR) will fast-track the issuance of the necessary permit to legitimise the plantation’s operation and eventually displace the farmers and Higaonons in Bagocboc and Tingalan.

PAN AP calls on the Philippine government to rethink its programme on palm oil development in the country. “The government should protect the inherent rights of the people and ensure the free and prior informed consent of the indigenous people as enshrined in the UN Declaration of the Rights of Indigenous Peoples.  The indigenous peoples’ rights are being marginalised in favour of profits from this industry” says PAN AP Executive Director Sarojeni Rengam.

Meanwhile, Dr. Romeo Quijano of PAN Philippines stated that “as the palm oil plantation continues to operate, more and more hazardous agro-chemicals will be introduced to the area that will negatively impact the lives of the people as well as the biodiversity of the area.” Since the establishment of the plantation, villagers no longer use the water from a nearby stream for drinking and food preparation for fear of being poisoned.

PAN AP, together with the Asian Peasant Coalition (APC), Peasant Movement of the Philippines (KMP), Rural Missionaries of the Philippines-Northern Mindanao SUb-Region (RMP-NMR), Sentro Kitanglad, Kalumbay Regional Lumad Organization and Pangalasag recently conducted an IFFM in the area and the report can be downloaded here: The Real Trespassers (June 2012). PAN AP also setup an online petition for the concerned individuals and groups to pressure A Brown and the Philippine government to pull out the plantation, reinstate farmers and Higaonons to their lands, and give redress to the victims of human rights violations.