Go after the fugitives Palparan and Reyes, not ordinary citizens and activists–Karapatan

Media Release, April 11, 2012 – As the P-Noy government continues to display its leniency on the case of the two high-profile fugitives, former Gen. Jovito Palparan, Jr. and former Palawan Governor Joel Reyes, it has on the other hand, arrested eight people, including a minor, on the basis of trumped up charges such as kidnapping, rebellion, illegal possession of firearms, robbery in band and terrorism. 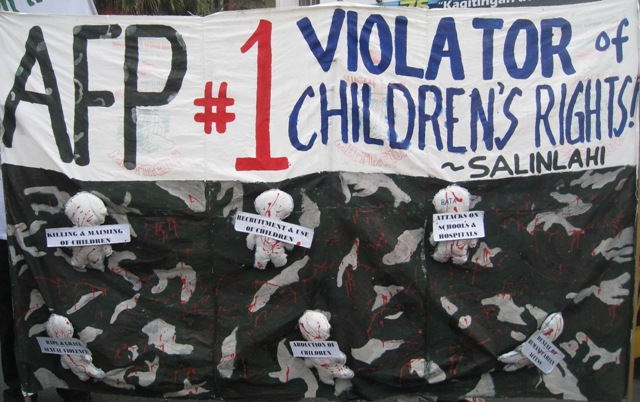 Karapatan reported that, “in a span of one week, and while the nation was about to observe  the holy week, the P-Noy government arrested  and detained eight persons: five in Nueva Ecija, two in Las Pinas, Metro Manila and Bayan Negros Occidental secretary general in Bacolod.  The latter was arrested and detained but is now out on bail. All seven others are currently detained, with no clear basis aside from the usual fabricated cases.  The police asserts that one of the persons arrested in Las Piñas has a standing warrant of arrest for a supposed kidnapping with murder charges.  Those arrested in Nueva Ecija were slapped with various common crime charges after their inquest.”

“We condemn this government’s continuing pretensions of going after erring government and military officials while in reality, its efforts are geared towards hunting down people whom it perceives as its ‘enemies’. While the likes of Palparan and Reyes who have clear charges against them continue to roam freely, activists and ordinary people are arrested and detained arbitrarily on trumped up criminal charges to conceal the political nature of their arrests and detention,” said Marie Hilao-Enriquez, Karapatan’s chairperson.

Hilao-Enriquez added that, “in the case of Nueva Ecija, around 100 soldiers of the 56th IB-PA and policemen under the Nueva Ecija Police Provincial office even resorted to staging a gunfight with supposed members of the New People’s Army (NPA) and planted evidence to justify the arrest of five people, including a former political detainee and a minor. One of those arrested was tending his farm when soldiers saw him and tied him up.” [Please scroll down below for the Urgent Alert and details of the case also prepared by Karapatan — ICCHRP]

Lastly, Hilao-Enriquez called on the P-Noy government “to stop persecuting people whom it considers as ‘enemies of the state’. The more the government does this, the more it proves to the whole nation that it is no different from the Arroyo regime. The government should instead turn its gun to the real fugitives and enemies of the people, those who are clearly rights violators and criminals, those with real crimes against the people.” ###

Violation of Domicile, Illegal Search and Seizure, Divestment and Destruction of Property,
Threat, Harassment, Intimidation, Violation of the Rights of the Child

Place of Incident : In the villages of Polilio and Sto. Niño, Cabanatuan City, Nueva Ecija, Philippines

On March 28, at around 4 pm, two teams of soldiers went to the adjacent villages of Polilio and Sto. Niño, Cabanatuan City in Nueva Ecija province in Central Luzon, Philippines.

In Polilio village, soldiers on board a military truck and a yellow passenger jeep arrived and went straight to the residence of Ambrocio Ileto, a member of Anakpawis partylist. The soldiers, who were in full combat form, blocked the passing vehicles and shouted at the people to get out of the way, which frightened many residents who ran inside their homes. Ambrocio’s daughter, Rachelle Ann, 20, was the only one at home and was also frightened at seeing the soldiers. As she went out of the house with her one-year-old son, at least 20 soldiers went inside, while many others positioned themselves in front and around the house. Rachelle heard the soldiers fired three shots from the back of their house. Rachelle ran inside a neighbor’s house and saw the soldiers go out of his father’s house after five minutes. She then heard a series of gunfires from a distance.

It turned out that in Sto. Niño village, another team of soldiers had begun firing their guns as they approached the residence of Ambrocio’s brother, Elpidio, where Efren Delalamon, Andres Ely and Carla Bautista were visiting. Delalamon tried to run from the gunfires, but was hit in the right arm and in the left side of the body. He also sustained several shrapnel wounds as soldiers kept firing in his direction as they approached him. Soldiers handcuffed Delalamon and brought him by the side of the house where Ely, who was tied up in nylon handcuffs, was also prone on the ground. Bautista, who was taking a bath at an outhouse when the soldiers began firing, was surrounded by soldiers. She was told to stay inside the bathroom after she had changed, and was guarded by a soldier.

Ambrocio was tending to his vegetable farm near Elpidio’s house when he was taken and handcuffed by soldiers. His nephew and Elpidio’s son, Jan Michael, who was just leaving the house was also tied up. Delalamon, Ely, Jan Michael, and another resident were made to stay flat on the ground, while some soldiers took Ambrocio on board a white car, and took him to his house.

Meanwhile, the soldiers in Polilio summoned village officials and presented a warrant to search Ambrocio’s house, then proceeded to search. Ambrocio’s wife Rosalinda and their daughter Rachelle Ann saw the soldiers from Sto. Niño arrive with Ambrocio, who was handcuffed and only wearing short pants.

The soldiers then took Ambrocio inside the house and Rosalinda and Rachelle followed. Linda protested when she saw the soldiers confiscate personal items, such as a her blood pressure monitor, her eyeglasses, hypertension medicine, a body lotion, some of which they bundled up in a blanket then put inside a black garbage bag. Soldiers also searched the hut at the back of Ambrocio’s house, and scattered the belongings of his son Ronald and his family.

At one point, Rachelle asked for her mother’s eyeglasses and hypertension medicines seized by the soldiers because Rosalinda was getting dizzy and visibly stressed. The soldiers refused and did not even allow them to use a drinking glass from their kitchen; Rosalinda had to go to the neighbour to drink.

In Sto. Niño, at around 5 pm, police summoned two village officials to Elpidio’s house, where they read to them a warrant to search the house. It was, however after almost an hour when it was already getting dark when they entered the house. The house had no electricity and the soldiers and police used a dim flashlight for their search. A soldier found a wallet on top of a closet and counted before the two village officials the contents amounting to Php 16,500. The soldiers and police did not show them any other money taken from the house.

The two village officials were then called inside the kitchen, where they saw a baby armalite on top of a wooden bed, and with a police evidence marker number “1”.

At around 11 pm, Ely, Bautista, Ambrocio and his nephew Jan Michael were brought to the Nueva Ecija Provincial Police Office (NEPPO) while Delalamon was brought to a hospital to get his wounds treated and later to the Cabanatuan City police headquarters.

Soldiers encamped at Elpidio’s house in Sto. Niño and left in the evening of March 29.

On March 29, Colonel Hilario Vicente C. Lagnada, commander of the 56th Infantry Battalion of the Philippine Army issued a statement which came out in news reports saying that the five figured in a “clash” against a platoon led by Capt. Noel Wamil. The military was supposedly backing up a police team serving a warrant to search an “NPA hide-out” in Sto. Niño village.

Also on March 29, police filed charged against Ely, Bautista, and the Iletos, while Delalamon was charged on March 30 and transferred detention to the NEPPO from the Cabanatuan city police.

On the part of the two families of Ambrocio and Elpidio, they reported that aside from Rosalinda’s belongings, other items taken by soldiers from their houses were: at least two wallets containing some Php 16,700, a child’s coin bank, pots, at least two hammocks, eight kilos of dried fish, medicine and one unit N70 cellphone.

Elpidio’s two elder daughters, reported that their two youngest siblings aged three and five, suffered from fever after the soldiers’ shooting and were traumatized by the whole incident. Elpidio had also gone into hiding after being sought out by soldiers and charged with rebellion. The family is also specially worried for 17-year-old Jan Michael, who was treated like an adult and detained in a regular cell, and was showing signs of trauma and depression.

Delalamon is a former political prisoner who was released on February 1, 2011 after cases of Murder and Attempted Murder filed against him were all dismissed. Bautista is an Assistant Program Coordinator of the Nueva Ecija Community-Based Health Program (NECBHP). Ely is a peasant organizer.

On April 4, the five were transferred from the NEPPO detention facility to the Bureau of Jail Management and Penology in Kalikid village, Cabanatuan City, Nueva Ecija in Central Luzon where they remain tightly guarded.

1. The dropping of fabricated charges against Efren Delalamon, Andres Ely, Carla Bautista, Ambrocio Ileto, Jan Michael Ileto and Elpidio Ileto, and the immediate release from detention of the five detained.

2. The return of the money, medicine, household and personal items taken from the above victims and from the two Ileto families.

3. The military to stop the labeling and targeting of human rights defenders as “members of front organizations of the communists” and
“enemies of the state.”

4. The Philippine Government to withdraw its counterinsurgency program Oplan Bayanihan, which victimizes innocent and unarmed civilians

You may send your communications to:

Please send us a copy of your email/mail/fax to the above-named government
officials, to our address below.