Germans Call for a Stop to Enforced Disappearances, Other Abuses in the Philippines

In Oldenburg, Germany, a group of Germans mobilized themselves to call for a stop to enforced disappearances and political killings in the Philippines, Sept. 4.

The German-Philippine human rights initiative “Sumabay Tayo! Walking together – for Justice!” informed the German public about human rights violations in the Philippines and its effects on health. This activity took place at the fifth human rights day in the German City of Oldenburg. 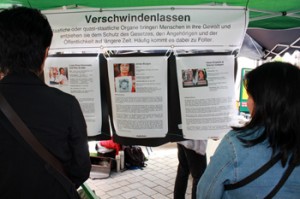 Since 2001, over 1,200 people have become victims of politically motivated killings and over 200 persons have disappeared in the Philippines. The victims’ relatives and survivors are psychologically and physically burdened. “This is the first time that I hear about the alarming situation in the Philippines” shared a visitor at the human rights day in the town center of Oldenburg.

The drama presented by Sumabay Tayo! was able to attract the attention of numerous passers-by in the pedestrian area of Oldenburg. “The pantomime is impressive. It conveys a message that inspires and provokes reflection”, one pedestrian noted.

At the Sumabay Tayo! information desk, one of the eleven placards called attention to the situation of 43 Philippine health workers. The so-called Morong 43 were subjected to illegal arrest in February 2010. They have been detained since. The detainees suffer from medical disorders and even a newborn baby was exposed to the inhuman conditions in the jail.

“This activity informs the German public about the human rights violations in the Philippines and motivates them to take action. This increases the pressure on the Philippine government to do something about this injustice”, stated a Filipino visitor. Over 90 people in Oldenburg gave their picture and signed the petition to put a stop to political killings and enforced disappearances.

“We call for the thorough and comprehensive investigation of human rights violations, fair trial, the prosecution of all perpetrators and mastermind regardless of their rank, the protection of witnesses, victims and their relatives as well as their medical care,” Hannah Wolf, spokesperson of Sumabay Tayo! said.

“We are very happy that so many people have joined us in our demands through their pictures and signatures. The support of the Oldenburg public has clearly exceeded all of our expectations,” Wolf added. The pictures as well as the demands would be sent as postcards to the newly elected Philippine President Benigno S. Aquino III. (Bulatlat.com)