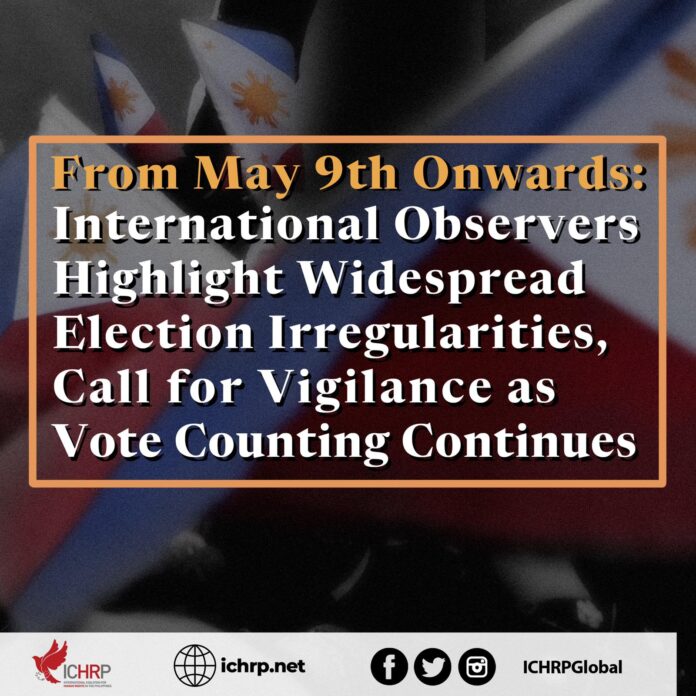 The International Coalition for Human Rights in the Philippines (ICHRP) calls for continued vigilance through the vote counting period, as well as immediate independent investigations into the many irregularities already faced on election day, May 9. The information we are receiving from various organizations, netizens, the media, and observers in the field make us deeply concerned about the integrity of the voting process, due to power and vote counting machine (VCM) failures, widespread reports of vote-buying, as well as violence in polling stations.

ICHRP urges the international community to examine the integrity of the process and the widespread irregularities when assessing the outcomes, which at this point is an unofficial decisive win by the Marcos-Duterte campaign.

Reports indicate more than 1,800 voting machines malfunctioned or failed affecting 1.1 million voters. As of 7:00pm yesterday, May 9, anti-fraud volunteer groups Kontra Daya and VoteReportPH had received 3,423 reports, 919 of which have been verified, from volunteers and citizen watchers. There were 321 verified cases (35 per cent) of VCM errors, which include paper jams and rejection of ballots. The number of malfunctioned VCMs has doubled compared to 2016 and 2019 data (1,800 for 2022 vs. 961 in 2019 and 801 in 2016) according to Comelec’s own data. There were 112 (or 12 per cent) verified cases of illegal campaigning, which includes distribution of sample ballots within the vicinity of poll precincts.

There have been reports of similar problems of disorganized polling precincts and crowding as well as malfunctioning machines and voters being asked to leave their ballots with the election officers. There were also army personnel seen within less than 20 meters of a polling precinct, a violation of the 50-meter distance rule for armed personnel.

In Central Luzon, complaints about vote-buying and intimidation abound – where each vote costs Php4,000 paid in two segments, while unwilling voters are sometimes paid and placed under guard at a house and prevented from leaving until polls close.

In Mindanao, meanwhile, people have reported the last-minute replacement of local electoral boards composed of teachers, with military personnel. The same teachers also faced disenfranchisement because they were not informed that they had to file for absentee voting ballots. Instead of timely and adequate information, what is visible in the region is heavy militarization with checkpoints staffed by uniformed army personnel and curfew from 4am – 9pm. Local communities are more concerned with having easy access to voting and eliminating voter fraud, and the military does not address these. Despite the military presence, a grenade was thrown at a candidate opposing the current councilor at around 6:40pm on May 4 in a city in Mindanao.

Violence has impacted on voting and campaigning in a number of areas. There were also media reports of deaths in polling stations in Lanao del Sur where six persons were killed and two others injured in election related violence: four died in clashes between the armed supporters of local candidates in Malabang town. In addition, unidentified men also destroyed five VCMs in five villages in Binidayan town; two of the suspects in this incident were later killed.

Other election-related violence was reported in Ilocos Sur where five rounds of grenades were fired in a municipal hall injuring 9 people, prompting an exchange of gunfire with the police the day before the election. Allegations of vote-buying also triggered a shooting incident that left four dead in Magsingal, Ilocos Sur on May 7.

On the eve of the elections, fake reports were being circulated that all Makabayan bloc candidates and partylist groups had been disqualified by the Comelec. Disinformation and fake news have been endemic during the campaign. The Philippines is identified as a testing ground for disinformation campaigns and is often referred to as “Patient Zero” by analysts tracking the spread of false news. Vast networks of trolls work for powerful politicians such as Marcos and Duterte and have been active throughout the campaign, with their primary target being Leni Robredo, as well as a number of other opposition figures.  There are persistent reports received from observers concerning red-tagging and disinformation against progressive candidates. Tarpaulins, posters, and flyers demonizing the progressives continue to be found in Cagayan, Metro Manila, Pampanga, and Laguna – near or even within polling centers, a clear case of illegal campaigning.  Kontra Daya has identified the Armed Forces of the Philippines as a key source of red-tagging misinformation during the campaign.

The International Observer Mission continues to monitor post-election, and is calling on the peace and democracy-loving international community to do the same.