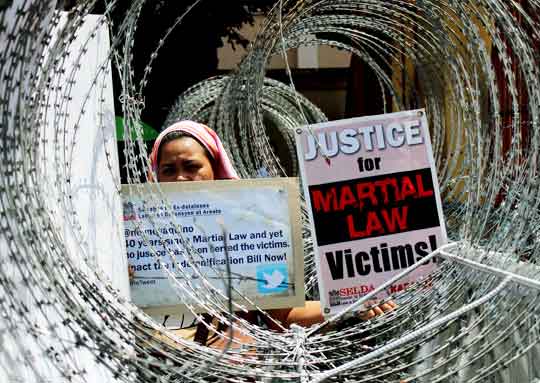 Press Statement, September 16, 2012 – “Many of the victims of human rights violations under the Marcos dictatorship have left us without seeing justice rendered, 40 long years after the imposition of martial law. Even the barest gesture of justice, the Marcos Victims Compensation bill, remains at the backburner. The governments that followed after the dictatorship, from Cory Aquino to her son Noynoy, showed tolerance and gave concessions to the Marcoses. They all should be held accountable for perpetuating the crimes of the Marcoses.”

Thus said Karapatan secretary general Cristina Palabay, as 68-year old Nicolas Sanchez passed away early this week. Sanchez was a victim of torture, illegal arrest and detention during the infamous “sona” (zoning of communities) in Brgy. Tatalon, Quezon City in July 23, 1985. The “sona” was conducted by elements of the Marcos’ Philippine Constabulary, when residents resisted the demolition of their community to give way to the development plan of the Aranetas, in-laws of Marcos’ daughter, Irene. Two persons reportedly died during the incident, while many were arrested, including Sanchez.

Sanchez was brought to Camp Crame where he endured torture. He also witnessed the torture of several others, including that of Trinidad Herrera, leader of the urban poor group Zone One Tondo Organization (ZOTO) during martial law years. This year also saw the demise of martial law activists and victims such as Romy Luneta, Maita Gomez and Bong Barsoles.

Palabay asserted that “the immediate passage of a law that would acknowledge the State’s moral and legal obligation to render justice to the victims of the worst forms of rights violations, during Martial Law, will serve as a beacon and a reminder to everyone not end such violations and injustice.”

While Pres. Aquino, in his first two State of the Nation addresses called on both Houses of Congress to pass the Marcos Victims Compensation bill as an urgent measure, he seemed to have omitted this in his July 2012 SONA.

“What a callous act of ‘remembrance’ on the 40th year of the imposition of Martial Law! It is no wonder that the Marcoses continue to flaunt, with impunity, their political power as well as Imelda’s manic possessiveness of her jewels which, are testament to the plunder of the nation’s coffers during the Marcos dictatorship,” she said.

Karapatan, SELDA and Bayan will lead a protest action of Martial Law activists and various organizations on September 21 to strengthen the call for justice for victims of human rights violations from Martial Law up to Noynoy Aquino. #