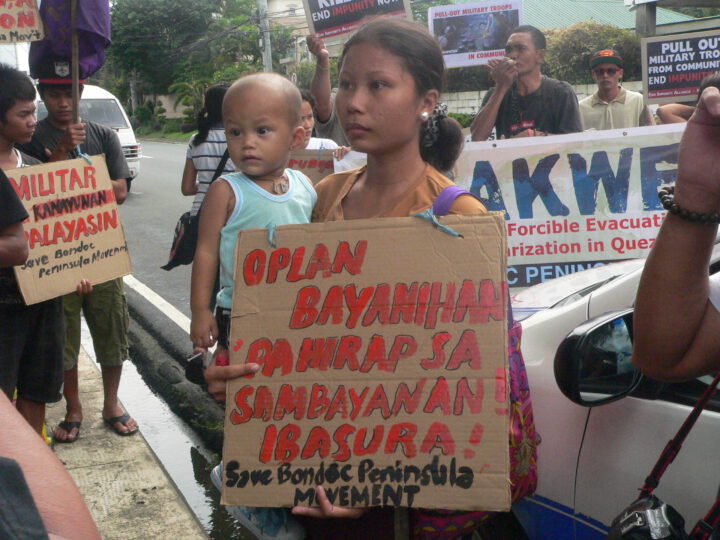 Press Statement, September 11, 2012 – Karapatan today held a picket at the Times St. residence of Noynoy Aquino to call the attention of the government on the “Martial Law-style military operations especially in the rural areas and on the plight of the evacuees such as those from the Bondoc Peninsula in Quezon Province who left their homes because of these operations.”

Karapatan secretary general, Cristina Palabay said, “There are now eight military battalions in Bondoc Peninsula, something that has never happened before, even during the time of martial law.” Karapatan has documented several cases of threats and harassment against residents in the area, including those who are members of farmers’ organizations.

The protest action coincided with the birthday of the late Ferdinand Marcos, whose reign was marked by tyranny and terror that resulted to countless human rights violations. “With evacuations going on in many parts of the country such as in the Caraga region, in Bukidnon, and in Bondoc Peninsula, we believe that the Marcos era never left us after martial law. The essential elements of Marcos’ hamletting and forced evacuation happened during Cory Aquino’s time and the succeeding presidents after her; and it is still happening now,” Palabay added.

Quoting a study entitled IMPACT OF MILITARIZATION OF HUMAN RIGHTS IN THE PHILIPPINES [1], a document that traced the human rights violations during martial law, Palabay said that “reading through the text that described the hamletting and forced evacuation during the martial law years is like listening to the woes of the people in the rural areas who are currently displaced because of military operations in rural communities. Nothing changed.”

“By sowing fear through threats and by manifest violence, residents were made to feel that they had no other recourse but to evacuate and seek refuge in other areas… Mass evacuations…were triggered by harassment and intimidation of the residents by the military; intensified military operations like bombings and strafings; clashes between the guerrillas and government troops; and violent incidents like massacres or ‘salvagings’.

Palabay added that, “it is also significant to note that as in the martial law days, intense military operations are meant to drive people away from their lands. It preceded the entry of transnational corporations and agribusiness plantations or government projects such as dams. These days, military operations are similarly linked with the entry or expansion of mining operations by foreign big business as in the case of the Caraga region, the dams in Bukidnon, transformation of hacienda’s into agri-business in Bondoc Peninsula, and other projects related to Aquino’s Public-Private Partnership.”

Karapatan said that the Armed Forces of the Philippines, through the U.S.-guided Oplan Bayanihan, attempts to sow terror in the communities that range from harassment and intimidation to strafing and bombings “that are no different from the Marcos era.”

Karapatan called for the immediate pullout of the military troops from the communities and an end to Oplan Bayanihan. ###