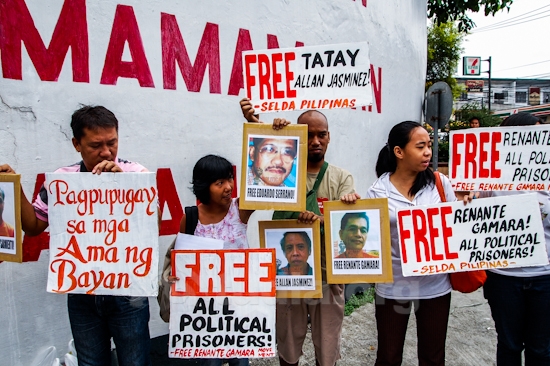 Karapatan Public Info Desk, Media Release, June 19, 2012 – “We welcome the June 16 joint statement of the NDF and the GPH peace panels saying that both agreed to ‘continue meaningful discussions prior to formal talks’. It is a ray of optimism for the NDFP consultants, staff and all the political prisoners that they will soon be free, “ enthuses Marie Hilao Enriquez, chairperson of Karapatan.

In the said joint statement, the NDF raised the issue of the “respect for and compliance with the Joint Agreement on Safety and Immunity Guarantees (JASIG)” and the release of NDFP consultants and other JASIG-protected persons such as Allan Jazmines, Tirso Alcantara, Eduardo Serrano, Ramon Patriarca, and 10 others.

The statement is timely as deteriorating prison conditions, restrictive policies on visits to political prisoners are imposed by the military and prison official as in the case of Tirso “Ka Bart” Alcantara. On June 16, Atty. Popanes of the Judge Advocate General’s Office (JAGO) denied Alcantara’s visitors, including Karapatan staff, citing a need for a permit on the basis of RA 7438. RA 7438 specifically outlines the rights of a detained person awaiting trial. Only Alcantara’s legal counsels were allowed to see Alcantara.

After almost one year and a half in prison, Alcantara remains in solitary confinement in Fort Bonifacio, with deteriorating health condition, deprived of sunning, served with filthy food ration (with dirt, trash, broken pieces of glass and fecal matter); and is given very limited access to relatives, lawyers, friends and supporters. Alcantara is consultant to the National Democratic Front (NDF) peace negotiating panel.

Alcantara’s prison condition is contained in a sworn statement before his legal counsels from the Public Interest Law Center (PILC) during their visit on June 16. Alcantara recounted that he was given water that tasted like ‘menthol’ and smelled like chemical that made him vomit and suffer from loose bowel movement. There was also a woman who, according to Alcantara, pretended to be a doctor; took his blood samples while he was blindfolded and gave him medicine as supposedly a prescription after his ECG. The medicine, he said, caused him nausea, palpitations, terrible pain on his neck. It was later learned that the ECG results were not yet processed and that the woman ‘doctor’ was a nurse.

The political prisoners, said Hilao-Enriquez, experience ill-treatment inside prison. Karapatan cited the situation of Ramon Patriarca, another detained NDFP consultant who was forcibly transferred from the Danao Provincial Jail, a regular detention facility, to the AFP Central Command in Cebu. Patriarca had twice went on hunger strike but was still refused transfer to the Cebu Provincial Detention and Rehabilitation Center by Gov. Gwendolyn Garcia.

Hilao-Enriquez said, “Alcantara and Patriarca are both inside military camps when they should be, at the very least, in a civilian facility. All of them are subjected to unreasonable prison rules on visitation, sunning, access to medical practitioners of their choice that deny their rights as prisoners.”

Karapatan expressed its concern on the growing pattern of repression of the political prisoners’ rights as the Aquino administration continues its deceptive mantra of being a pro-human rights president while giving full leeway to the military and state security forces to continue violating the rights of the people.

Hilao-Enriquez concluded that, “as the GPH and the NDF prepares for the resumption of talks, we reiterate our call to release all political prisoners, including the 14 NDF consultants. In fact, the NDF consultants should not be inside prison because they are JASIG-protected and should therefore be taking part in the talks. But after more than a year, the GPH has not acted on its own commitment to work for their release but has in fact treated the issue of the release of political prisoners as an obstacle, rather than as a building block, to a meaningful resumption of the peace talks.” ###