Desaparecidos to Baliaga: Tell it all, where is Jonas? 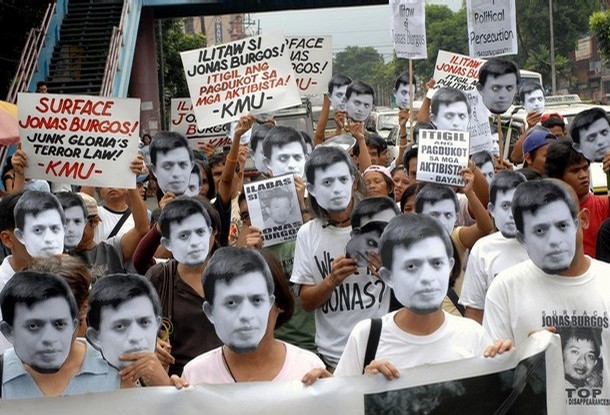 Karapatan Public Info Desk – As Army officer Maj. Harry Baliaga, identified as one of the abductors of missing activist Jonas Burgos, is grilled for the second time at the Court of Appeals today, families of Desaparecidos joins the Burgos family in urging him to “tell it all, where is Jonas?”

“The family of Jonas, and all other families of disappearances, feels a bit of hope that an abduction case such as Jonas’ had gone this far in terms of identifying the perpetrators. It belies the claims of the military that it had nothing to do with the abduction of Jonas.” Mary Guy Portajada, Secretary General of Families of Desaparecidos for Justice (Desaparecidos), said in the protest action simultaneous with the hearing on the habeas corpus case.

Baliaga was identified by witness Jeffrey Cabintoy as one among the seven persons who dragged Burgos on April 28, 2007 into a van at Ever Gotesco Mall, Commonwealth Avenue, Quezon City.

“We hope the true testimony of Baliaga will finally conclude this hearing. Having a habeas corpus case stand for five years is unforgivably slow. We want justice now,” Portajada said.

The group also urged Baliaga to “get rid of the stain that tainted his name.”

“Your name will forever be stained with the disappearance of Jonas, but the only way to get rid of that stain is for you to tell who else abducted Jonas and who ordered it,” she said.

Coming from the Kankaney tribe in the Cordilleras that puts honor as a great importance to their tribe, Portajada said that Baliaga can still salvage his honor and name in telling who ordered the abduction of Jonas “no matter how big these persons are.”

Baliaga, together with Lt. Col. Melquiades Feliciano, Col. Eduardo Ano and several John and Jane Does are also facing criminal charges of Arbitrary Detention while Gen. Hermogenes Esperon, Gen. Romeo Tolentino, Lt. Gen. Alexander Yano and Gen. Avelino Razon were charged with Obstruction of Apprehension and Prosecution of Criminal Offenders both filed at the Department of Justice by Jonas’ mother, Edita Burgos.