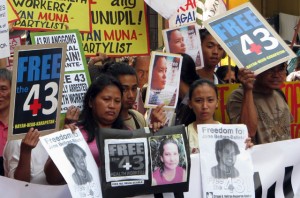 Press Release: 18 June 2012 – The National Union of Peoples’ Lawyers (NUPL), counsel of several human rights victims today noted  a significant initial victory in the efforts to stop impunity – a trial judge has kept former President Gloria Arroyo and her top military and police officials as defendants in a damages case filed by the Morong 43 health workers.

“This gives somehow a flicker of hope to all rights victims who have been waiting for justice for the longest time. This ruling should encourage other victims to come forth, present their valid claims and can be a precedent in future cases against state violators,” said NUPL secretary-general Atty. Edre U. Olalia.

Judge Ma. Luisa Padilla of Quezon City Regional Trial Court Branch 226 has recently denied motions by Arroyo and former Armed Forces Chief of Staff Gen. Victor Ibrado and Gen. Delfin Bangit, who claimed they had no direct participation in the incident, to dismiss the civil action brought by the Morong 43. Earlier, a similar motion to dismiss a damages suit filed by members of the United Church of Christ of the Philippines against Arroyo was denied by QC RTC Branch 224 under Judge Marilyn Villardon.

“All of the defendants have in one way or another, enabled the policy of picking up civilians, sowing terror, threatening dissidents, torturing, abducting  and even killing political activists in the guise of ‘anti-insurgency’. We are relieved that the Court is finally allowing that this well-known fact be established judicially, as this is the core of countercharges against state-backed human rights violations,” said Atty. Olalia.

Six of the Morong 43, a group of doctors, nurses and health workers wrongly detained for ten months in 2010, are seeking P15 million in total damages from their captors, the AFP leadership, and the former president for illegally arresting them, implementing the faulty search warrant, and inflicting harm and  torture. They have also filed a criminal complaint for torture against the same defendants before the Department of Justice last May.

Mrs. Arroyo told the Court that the complaint was one “against the Philippine Government’s implementation of its national security plan” and not specifically against her. She claimed that there was no act, duty or omission that could be pinned to her, and that her role in the entire affair was “incidental”. The two generals, meanwhile, said that they held no specific control over the joint army and police unit that arrested the Morong 43.

“While the Court believes that Arroyo cannot simply escape accountability by desperately citing incongruous arguments, still we are a long way from justice,” said Atty. Olalia.

The generals accused the plaintiffs of forum-shopping since a similar case before the Commission on Human Rights is pending, but the Court said that the natures of the suits and the tribunals are dissimilar.

The NUPL is also counsel of the mothers of missing university students Sherillyn Cadapan and Karen Empeno in the criminal case against fugitive Gen. Jovito Palparan et. al.,  and torture and disappearance survivors farmer Raymond Manalo and Fil-Am activist Melissa Roxas. It has recently accepted the request to be co-counsel in the criminal case for the disappearance of farmer-activist Jonas Burgos.#