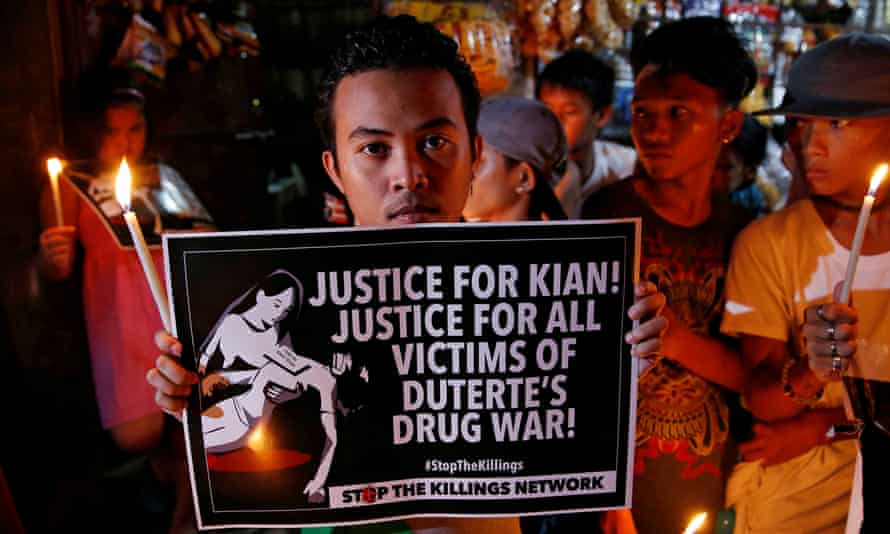 Under President Duterte, the Philippines has become a killing ground for alleged drug suspects, political dissidents, community organizers, indigenous people and human rights advocates. The Duterte Regime has institutionalized the killing of dissenters, placing human rights defenders and government critics and all those working to improve the lives of ordinary Filipinos in grave danger. As we mark International Human Rights Day, the International Coalition for Human Rights in the Philippines (ICHRP) denounces the ongoing human rights tragedy that has unfolded in the Philippines. The last year has seen widespread human rights violations perpetrated by security forces under Duterte’s “shoot-to-kill” and arbitrary arrest policies.

Philippine sources (Karapatan) have reported over 23,000 killed in the War on Drugs, over one thousand civilians killed in the War on the Morro People, and a sharp rise in political killings. As of August 2021, there have been 421 extrajudicial killings; 223 victims of torture; 572,752 victims of threat, harassment, and intimidation; 384,382 who have suffered due to indiscriminate firing and aerial bombing; and 469,025 internally displaced who were subject to forced evacuation.

The past year witnessed the horrific Tumandok Massacre on December 30, 2020, when 9 Indigenous Tumandok leaders were seized, tortured, and killed by the police in Panay. Another mass killing was the Bloody Sunday massacre on March 7, 2021, when the police and military killed nine labour, urban poor, fisherfolk, Indigenous leaders, and human rights defenders in coordinated raids. There were also a massacre of Indigenous Lumad in Mindanao in an incident in Surigao del Sur. On June 15, 2021 three Lumad-Manobo — 12-year-old Angel Rivas, Lenie Rivas, and Willy Rodriguez — were killed by troops from the Philippine Army’s 3rd Special Forces Battalion in Lianga. The incident is the 25th massacre documented by Karapatan under the Duterte administration.

The regime has also been responsible for the killings of seven NDFP peace consultants since peace talks were officially cancelled in November 2017.

In December 2020, retired NDF Peace Consultant Antonio Cabanatan, 74, and wife Florenda Yap, were abducted, secretly detained and ultimately murdered by the AFP. Their bodies were found on December 26, 2020, in a military safehouse in Oton, Iloilo, killed by strangulation. On May 30, 2021, former Roman Catholic priest and former NDFP peace consultant Rustico Luna Tan, 80 years old, was killed as he slept on his hammock, shot by unidentified assailants. The same day Reynaldo Bocala, 74 years of age, a peace consultant in Iloilo City, was killed by members of the Criminal Investigation and Detection Group at Providence Subdivision in Barangay Balabag in the town of Pavia. The aged Tan and Bocala were “summarily executed” following a directive from Duterte “to take no prisoners” in quashing communists in the Philippines.

The past year has seen a meticulous documentation of the crimes of the Duterte regime. The bloody “War on Drugs” conducted by the Police resulting in the extrajudicial killings of tens of thousands of victims has been further exposed. Investigate PH highlighted how victims had been killed while their hands were bound, while they held up hand to block the bullets fired by police and frequently murdered while they slept in bed. The evidence has sparked investigation for crimes against humanity by the International Criminal Court and produced damning reports from Michelle Bachelet at the UN Human Rights Council.

Investigate PH also documented testimony concerning Duterte’s crimes committed in the war on the Moro People. Military operations in Mindanao have not distinguished between civilians and combatants. Mortar fire, artillery fire and aerial bombing are by their very nature indiscriminate forms of warfare, particularly when they are used in areas densely populated by civilians. These are the primary weapons that were used in Marawi City in 2017 and continue to be the weapons of choice in the State’s warfare in other Moro communities, with U.S. military support. Such actions are in breach of International Humanitarian Law. U.S. and other foreign governments who supply weapons, intelligence and training are also in breach of International Humanitarian Law.

In the destruction of Marawi City over one thousand civilians were killed, and hundreds of thousands were forced from their homes, with more than 100,000 remaining displaced. The War on the Moro People enables land seizures from the residents who remain displaced in camps and in relatives’ homes, and denies the Moro people’s right to self-determination.

Investigate PH also documented an ongoing and growing war on dissent. The armed forces have become more emboldened in killing dissenters. Police and soldiers are now executing political dissenters in a manner similar to extrajudicial killings in anti-drug operations. Duterte’s NTF-ELCAC, the July 2020 Anti-Terrorism Act, and increasingly the justice system have not only facilitated these killings, but are institutionalizing repression that broadly harms civil society, from alleged communists to churches to long-standing democratic institutions.

Domestic remedies have failed, elements of the judiciary are complicit in the War on Dissent, using the bench to support military and police attacks on dissenters by providing broad powers though warrants of search and arrest that frequently end in the untimely deaths of the accused. The courts are just one element in the entire machinery of the state which has been weaponized in the fascist whole-of-nation approach to target regime dissidents.

Those who oppose the Duterte regime are tagged as terrorists as growing military control over the machinery of state has become a reality. The majority of senior cabinet positions is now occupied by ex-military and police, giving the Duterte Regime increasingly the appearance of a military dictatorship.

Looking ahead there appears to be little respite for the Filipino people as the choices in the 2022 elections are mainly a collection of Duterte sycophants, family members, or the second coming of Marcos. Whatever the outcome of the electoral process the military will continue to cast a deadly shadow over democracy.

In this context we urge the international community and international institutions to stand with the victims and those who struggle for democracy and human rights. We urge the International Criminal Court to pursue its case against the Philippines and Duterte, to follow the evidence and give voice to the victims. We urge the UNHRC to conduct its own independent investigation of the Philippines. We call on the International Labour Organization to escalate its High-Level Tripartite Mission to the Philippines. We call on democratic governments to pursue justice and give no sanctuary to the perpetrators of human rights violations and crimes against humanity by using Magnitsky sanctions against Duterte and his criminal cabal.