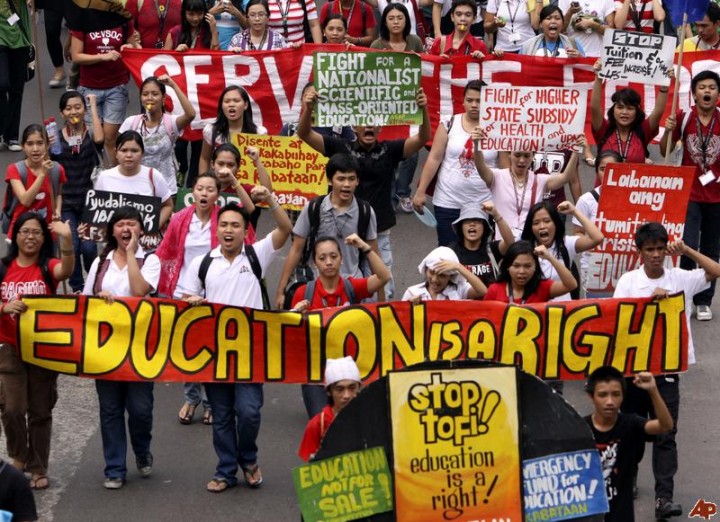 Press Statement, September 17, 2012 – Karapatan today criticized Commission on Human Rights Chairperson Etta Rosales after she rebuked students and youth groups preparing for protest actions leading to September 21, in commemoration of the 40th year of the imposition of Martial Law.

In an interview over ABS-CBN week-end news last night, Rosales was quoted saying “Stop comparing Martial Law of yesterday to what they are doing now because if they do that they are merely muddling the issue. Mag-aral sila, naintindihan ba nila ang sinasabi nila.” Rosales added that the students should instead go the libraries instead of joining the protests.

“Rosales’ statement simply illustrates the historical amnesia, opportunism, and bankruptcy of those in the Aquino administration. They claim to “remember Martial Law,” yet they forget one of the quintessential lessons during those dark years – that when the people and the youth are faced with anti-youth and anti-people programs, rights abuses, and plunder of our lands and resources, we fight back,” said Cristina Palabay, secretary general of Karapatan.

The groups led by Anakbayan, National Union of Students of the Philippines, Student Christian Movement, College Editors’ Guild of the Philippines, and League of Filipino students will be holding protests against the rising tuition costs and the spate of human rights violations prevailing under the Aquino administration.

Palabay recalled that Marcos’ Education Act of 1982, which legitimized tuition increases, is still very much enforced under the Aquino government, as more than 260 tertiary schools have increased tuition this year by as much as 15%. Karapatan also received reports that the Armed Forces of the Philippines continue with their red-tagging campaign against youth organizations in schools in their counter-insurgency symposia with the assistance of the Department of Education.

“These, Ms. Rosales, along with the continuing human rights violations, the poverty that drives the young out of schools and the sheer puppetry of Pres. Noynoy Aquino, are the ‘legacies’ of Marcos that you keep today,” said Palabay.

Karapatan and Bayan will lead the protest actions on Friday, as they will be joined by the students, in Mendiola.

“The youth will honor that lesson when they march with the people on September 21. And people like Rosales and Aquino will remain like cobwebs in the libraries of our history as a nation,” Palabay concluded. ###