Call for justice for Fr. Fausto Tentorio, PIME, and to end Oplan Bayanihan

Greetings from the Philippines!

I am Cristina Palabay of Tanggol Bayi (Defend Women-Association of Women Human Rights Defenders in the Philippines), a member organization of Karapatan and the newly formed network End Impunity Alliance. I am writing to you with a heavy heart to inform you of the recent extrajudicial killing of Fr. Fausto Tentorio, an Italian priest and missionary who is well-loved and respected by the indigenous peoples and rural folks in Mindanao because of his advocacy and support of people’s rights and his support for their campaign against corporate mining in the province. 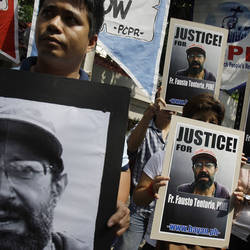 I am forwarding below a copy of the Urgent Action alert of Karapatan on the case for your information and for possible actions which we can jointly undertake regarding this. Fr. Tentorio is the 54th victim of extrajudicial killings in the Philippines under the new President Benigno Aquino III.  Your support on the advocacy for justice for human rights violations in the Philippines has been an important part of the efforts to raise the awareness of the international community such violations in the country during the past years and we hope this will continue as the climate of impunity remains as pervasive as ever. Please also find attached the invitation from the organizers of the Justice for Fr. Pops Movement initiated by friends and colleagues of Fr. Pops and partners of Karapatan and Tanggol Bayi. Thank you very much.

Alleged Perpetrator(s): An unidentified gunman and an accomplice motorcycle driver believed to be agents of the State

On October 17, 2011 at about 7:30 in the morningFr. Fausto “Pops” Tentorio, PIME, 59 years old, Italian, parish priest of Mother of Perpetual Help Parish in Arakan Valley, North Cotabato Province was shot dead within the compound of the church as he was about to board his Suzuki gray vehicle. Fr. Pops was supposed to be on his way for a clergy meeting in Kidapawan City.

A female a staff of the church narrated that, while she was taking out the garbage, she passed by the garage where the vehicle was parked, and saw Fr. Pops’ body slumped on the ground. She immediately called for help from other church staff, when she saw Fr. Pops bloodied. The staff has not seen any suspicious looking people near the crime site, and did not hear any gunshots at that time. Other church colleagues responded and brought Fr. Pops to Antipas Medical Specialist Hospital but he was declared dead on arrival.

Arakan Councilor Leonardo Reovoca, also a former church worker narrated that he saw a person wearing a helmet ran from the Parish compound garage towards the main road then rode off with another suspect waiting on a blue XRM motorcycle . When the incident occured, Councilor Reovoca was outside the premises of the Arakan Central Elementary School which was located just right across the parish. However, he could not identify the assassin. He also said that there were two (2) army soldiers wearing complete uniform and in full battle gear, believed to be members of 5^th Special Forces (SF) of Philippine Army (PA), who were near the vicinity of the incident, yet none of them responded. During that day, there was an Oplan Bayanihan activity conducted by the military inside the school as the military vehicle was parked in its premises.

The parish has one (1) main gate but the compound doesn’t have a fence, and is easily accessible to other people.

The Philippine National Police (PNP) in Arakan Station responded at around 8:20 in the morning and conducted initial investigation . Based on their initial reports, Fr. Pops was shot at about 3 feet away . The PNP also said they found seven (7) empty shells of a 9mm caliber, and that the Italian priest had 8 gunshot wounds in the body. The fatal shot was on his head, which entered the rear of his left ear and exited at the back of the skull on the left side. Fr. Pops also had gunshot wounds on the left side of his body; presumably the assailant shot Fr. Pops on his left side as he was about to board his vehicle.

The night before the incident, some of the staff observed the incessant barking of dogs within the compound of the Parish, but they didn’t mind it. A few days prior to the incident, a female parish staff noticed fish vendors unusually frequenting the parish. She also recalled that sometime in January to August this year, an unidentified man had shown up at the parish and would always look for Fr. Pops about six times (6x) consecutively at around 12 noon to 2:00 in the afternoon and asking about the priest’s whereabouts.

One of the staff recounted that on 2007 while Fr. Pops was facilitating a dental mission being held in the Parish, a number of military men from the 57^th Infantry Battalion Philippine Army raided the compound and alleged that there were firearms hidden in the office of the parish. But Fr. Pops denied the allegations saying it was impossible. Fr. Pops and his staff reported the incident immediately to the police.

Fr. Pops had also received death threats because of his active pastoral role with the tri-people communities of lumad, Muslims and Christians. His advocacy on lumads and peasant struggle for land, environment and human rights was reflective of his commitment to serve the disadvantaged and oppressed. On October 6-7, 2003, Fr. Pops survived a manhunt from a paramilitary group called “Bagani”, which was allegedly organized by 73^rd Infantry Battalion to fight the New People’s Army when he went to a remote village in Kitaotao, Bukidnon where the priest was supposed to conduct missionary work. The leaders of ‘Baganis’ are also known in facilitating for the encroachment of ‘development projects’ such as agribusiness monocrop plantations and mining in ancestral domains. This was the first attempt against his life as a foreign missionary.

Fr. Pops arrived in the Philippines in 1978 and his first assignment was in Ayala, Archdiocese of Zamboanga City from 1978-80. In 1980-85, he was assigned at the Diocese of Kidapawan and was stationed as Mission Administrator in the Parish of Columbio, Sultan Kudarat which was serving the Lumads, Muslims and Christian settlers. In 1985, he was then transferred to the mission station in Arakan where he stayed until his last breath. In 2003, he organized the tribal organization called the Tinananon-Kulamanon Lumadnong Panaghiusa or TIKULPA.

Fr. Pops is the third Italian PIME priest who was gunned down in Mindanao, and the second in the Diocese of Kidapawan.#

1.The immediate formation of an independent fact-finding and investigation team composed of representatives from human rights groups, the Church, local government, and the Commission on Human Rights that will look into the assassination of Fr. Fausto Tentorio.

2.The military to stop the labeling and targeting of human rights defenders as “members of front organizations of the communists” and “enemies of the state.”

3.The Philippine Government to withdraw its counterinsurgency program Oplan Bayanihan, which victimizes innnocent and unarmed civilians

4.The immediate dismantling of paramilitary groups such as the “Bagani”

You may send your communications to:

Please send us a copy of your email/mail/fax to the above-named government officials, to our address below.

The human rights network End Impunity Alliance today condemned the most recent killing of Italian priest Fr. Fausto Tentorio, PIME, parish priest of Arakan Valley in North Cotabato and a known advocate of the rights of lumads and farmers in the province.

According to initial news reports, Fr. Tentorio, who had been serving Mindanao since 1978 and was head of the Tribal Filipinos Apostolate of the Diocese of Kidapawan, was gunned down at around 8:30 Monday morning just as he was preparing to leave his convent in Arakan Valley, North Cotabato, for the 9 a.m. clergy meeting in Kidapawan City.

“We extend our deepest condolences for the love ones of Fr. Tentorio and for all the people whose lives were touched by him. We condemn in highest terms the recent killing of a beloved, committed and pro-poor priest who has served our poor kababayans in Mindanao, despite several threats to his life. His public position against big corporate mining in the province and his advocacy for the rights of farmers and indigenous peoples is a testament to his selflessness,” Cristina Palabay, End Impunity Alliance convenor, said.

Fr. Tentorio was acompatriot of Fr. Tulio Favali, who was murderd in 1985 in Tulunan town by the vigilante group Ilaga, led by Norberto Manero. Fr. Tentorio experienced a near-death experience on October 6, 2003 during one of his visits to the Lumads of Kitaotao, Bukidnon, portions of which are part of the parish of Arakan, where he had organized the tribal organization called the Tinananon-Kulamanon Lumadnong Panaghiusa or TIKULPA.

“Justice should be immediately rendered for Fr. Tentorio and all victims of summary executions. Such climate of impunity exists to this day, thus victimizing anti-mining advocates such as Fr. Tentorio because of the non-prosecution of those accountable for the previous cases of human rights violations and the existing counter-insurgency plan Oplan Bayamihan of the Aquino administration,” Palabay said.