DAVAO CITY (MindaNews/01 August) — “What is wrong remains wrong, regardless of how long it has been allowed to persist. We cannot simply let it pass. If we ignore the crimes of the past, they will continue to haunt us. And if we do not hold people accountable, then they will do it again and again,” President Benigno Simeon Aquino III said in his State of the Nation Address on July 25.

Aquino was referring to corruption. But he could have said the same of torture: “what is wrong remains wrong.” 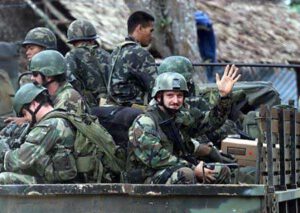 Two days before his SONA, in faraway Sumisip, Basilan, a 39-year old baker named Abdul-Khan Balinting Ajid whom the military claimed was a member of the Abu Sayyaf, was forcibly taken by Scout Rangers at 5:30 in the morning and while under their custody suffered “the most degrading physical and mental torture” in the hands of his captors, the Mindanao Peoples Caucus (MPC) said in its August 1 press statement.

“He was stripped naked and gasoline was poured over his head, inside his ears, and on his face. His interrogators also rubbed red chillies, and a bottle containing gasoline was forcibly entered, into his anus. Covered in gasoline his captors then set him on fire burning the skin and flesh on his face and lower torso.”

In Zamboanga City, Ajid’s sister told a press conference her brother, a baker for the past eight years, is innocent and is not a member of the Abu Sayyaf.

The sister, whose name was withheld, had the lower part of her face covered for security reasons, when she met the press. In tears, she recounted what happened to her brother and vowed to file charges against the soldiers.

Lt. Gen. Raymundo Ferrer, chief of the Western Mindanao Command, told MindaNews the command is investigating the report in coordination with the Commission on Human Rights in the region.

Earlier, Lt. Col. Randolph Cabangbang, Western Mindanao Command spokesperson said, “this is a sad incident for us, especially if soldiers were found to be involved.” He said Ferrer “wants the incident investigated and the perpetrators punished.”
Cabangbang said the investigating team is led by Col. Ukol Paglala, the Command’s Judge Advocate General Officer.

Torture is prohibited by the Philippine Constitution, Republic Act 9745 or the Anti-Torture Law passed in 2009 and by International Conventions which the government is a state party to.

Human rights groups, however, continue to receive reports on torture.

A fact sheet prepared by Carlo Cleofe, MPC’s Peace Talks Advocacy Officer, based on the interviews conducted by him and Rita Melecio of Task Force Detainees of the Philippines narrated that members of Task Force Basilan from the brigade of the Army Scout Rangers under Colonel Alexander Macario allegedly abducted Ajid from his house in Barangay Libug, Sumisip, Basilan.

The fact sheet quoted Ajid’s wife, Nurhaiya, as saying that at around 5:30 a.m. on July 23, while her husband was preparing the dough for the bread they would sell that day, soldiers kicked open the door of their house and upon seeing Ajid, grabbed him, brought him down on the floor and tied his hands behind his back.

Nurhaiya said their 15-year old son and 10-year old daughter fainted upon seeing what the soldiers were doing. Nurhaiya said she was asked where they kept the guns in the house and when she said no, the soldiers searched every part of the house, destroying their things and all the ingredients and materials they use in their bakery.

After searching the house, the soldiers dragged Ajid out and forced him to board a six-by-six truck. Nurhaiya tried to follow but was stopped.

No one told her why they were taking her husband away and where they were bringing him. No search or arrest warrants were presented.

Nurhaiya and Ajid’s sister sought the assistance of Sumisip Mayor Gulam Hataman who reportedly called up somebody from the Scout Rangers brigade to inquire about Ajid’s whereabouts and to ask why he was arrested. The mayor was told Ajid was a member of the Abu Sayyaf.

Three days after the soldiers took Ajid, his family sought the help of lawyers to find out where he was.

“Ajid’s sister tried to approach every lawyer both in private and public practice in Basilan but everyone refused due to fear of reprisals from the military. She then tried to ask the help of the Commission on Human Rights based in Zamboanga but she was advised to get a lawyer for the case first; at this point she met Atty. Rey Bongabong who took the case and filed a Writ of Habeas Corpus  Regional Trial Court of Isabela on July 27, 2011,” the fact sheet said.

Ajid was finally resurfaced by the military at around 3 p.m. that day and committed to the provincial jail, having been charged with kidnapping committed by the Abu Sayyaf.

At the jail, Ajid’s family saw his torture marks. “He was suffering from severe burns on his face, chest, lower torso, and genitalia. He also showed severe bruises or hematoma on his chest and lower ribs. He could not stand without assistance and he was withdrawn and did not talk too much. He also suffered from a partial loss of hearing, and whenever he would try to sit down, he would suffer from pain and discomfort,” the fact sheet said.

Ajid told his wife and sister that while under interrogation, somebody poured gasoline over his head, inside his ears, and on his face. ”He could not sit without feeling pain because his interrogators also rubbed red chilli into his anus and they also forcibly placed a bottle of gasoline inside his anus. Gasoline was also poured over his lower abdomen and genital region. After pouring gasoline Ajid’s interrogators set him on fire,” the fact sheet said.

Judge Leo Prinsipe granted the family’s request that Ajid be given medical treatment. He was brought to the Basilan Community Hospital a day after he was surfaced but “the attending physician failed to record all the physical manifestations of his torture,” the fact sheet said.

“In the medical report the attending physician only stated that the patient … was suffering from flame burns – no mention was made of the burns on his genitals, his internal injuries, and the bruises he suffered,” the fact sheet said.