ARMAN ALBARILLO, a testimony of the Filipino people’s quest for justice 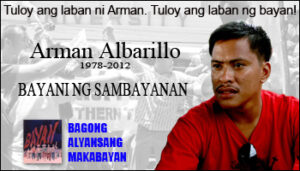 Arman reminds us of the terror of Gloria Macapagal-Arroyo’s Oplan Bantay Laya (OBL) and how her favorite butcher, the fugitive Maj. Gen. Jovito Palparan Jr., left a trail spattered with blood of more than a thousand people killed. Palparan then led the 204th Brigade of the Armed Forces of the Philippines (AFP) that was deployed in the island of Mindoro where Arman’s family lived.

Arman’s father and mother were victims of extrajudicial killing. Expedito and Manuela Albarillo were among the first victims of the OBL in Mindoro. Killed on April 8, 2002 by suspected members of the 204th brigade, the killing of the Albarillo couple were among the most gruesome deaths documented in the course of the implementation of the OBL. Arman was once again victimized when he, along with 71 other leaders in the Southern Tagalog region, were charged with fabricated cases because of their involvement in the people’s movement for justice and democracy.

Arman’s journey in search of justice for his parents’ death led him to the courts and to various forum with fellow families and survivors of human rights violations; into the streets, as secretary general of Bayan-Southern Tagalog, where he joined peasants and workers in protest against state terrorism, landgrabbing and other anti-people policies; and finally, into the New People’s Army for what he believed as the only way to truly achieve justice, not only for the death of his parents but for all those who are exploited and oppressed by the social system we are all in. His grief turned him from a victim to defender, to a freedom fighter for the oppressed.

Karapatan pays its highest tribute to Albarillo who remained steadfast and offered his life so justice may be served to all those who were wronged and for freedom and democracy to finally reign in his land.

Rough translation to English: “Now, I will continue to expose what they are doing, not only on my person, but to many others, I am ready to offer myself for truth, freedom and change. Long live human rights defenders and all who are struggling! – Arman Albarillo