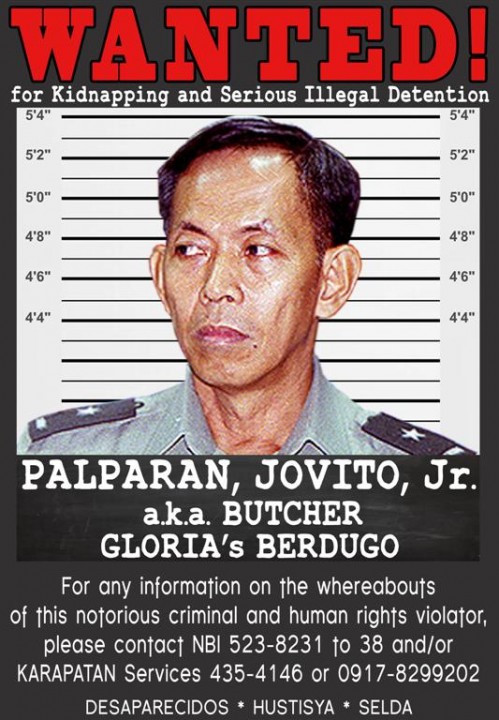 Karapatan Public Info Desk, Press Release, 25 June 2012 –   On the eve of the world commemoration of the UN International Day in Support of Victims of Torture, Karapatan renewed its call for the “People’s Manhunt” for Maj. Gen. Jovito Palparan Jr. and other notorious human rights violators who remain fugitives from the bar of justice as the human rights group sees the continuation of the climate of impunity in the first two years of the Aquino administration.

Cristina Palabay, Karapatan spokesperson, called on the public to remain on the look-out for Palparan, as Karapatan and its member organizations and network will commemorate the abduction of Sherlyn Cadapan and Karen Empeno on June 26, 2012. The date coincides with the UN commemoration of the International Day in Support of Victims of Torture. Karapatan chapters nationwide will hold protest actions tomorrow as they also asked Facebook users to re-use the online “Wanted Palparan” posters as profile pictures.

“Six years after the abduction of the UP students and six months after the release of the warrant of arrest against Palparan, there has been no meaningful and thoroughgoing effort to arrest one of the notorious poster boys of impunity in the Philippines. This strengthens our belief that the Armed Forces of the Philippines and those in power coddle Palparan, for who would have the resources and political influence to wield his apparent immunity from arrest? Such situation sends out a dangerous message to all human rights violators – that they can abduct, torture, and kill and get away with it,” Palabay commented.

Karapatan said this comes as no surprise as the “pattern of violations in the first two years of the Aquino administration indicate its character and streak of inflicting military terror and violence under its counter-insurgency policy of Oplan Bayanihan.” The rights group has documented more than 76 victims of extrajudicial killings and 96 torture victims, amid the increasing militarization of rural communities.

“Schools, village halls, homes, and other infrastructures for public use are being utilized as military camps, while AFP troops are inflicting fear, harassment, coercion, intimidation, vilification, torture and other forms of human rights violations against whole communities, including that of the Quezon province, in the guise of combat operations against the New People’s Army (NPA). We want them out of our homes, our schools, our communities,” Palabay said.

The groups will also conduct activities leading to the State of the Nation Address of Pres. Aquino on July.