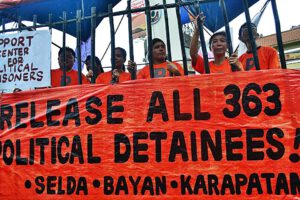 Karapatan Public Info Desk, Press Statement, August 2, 2012 – Today, August 2, 2012 is the first hearing of the three (3) of the forty three (43) various cases lodged against *Tirso “Ka Bart” Alcantara* at the Taguig Regional Trial Court in Camp Bagong Diwa, Taguig City. Alcantara has been in solitary confinement at the Fort Bonifacio Headquarters, Philippine Army Custodial Center, 191st MPBn., HHSG, PA Fort Bonifacio since he was illegally arrested on January 4, 2011, over one and a half years ago. Tirso Alcantara is one of the 385 political prisoners who are still in jail because of fabricated criminal charges.

Attending the hearing in support of the political prisoner, Karapatan chairperson Marie Hilao Enriquez slammed Aquino’s double-standard justice he trumpeted in his SONA speech thus, “GMA who is accountable to the Filipino people for multiple violations of human rights walks around freely; and those who are fighting for the poor people’s rights are charged with trumped up criminal charges to hide the political nature of their cases, keep them in detention and inhumanely ill-treated.”

Marie Hilao-Enriquez specifically cited the case of Tirso “Ka Bart” Alcantara who is in jail because of fabricated criminal cases and despite his being covered by the Joint Agreement for Safety and Immunity Guarantees (JASIG), a signed agreement between the National Democratic Front of the Philippines (NDFP) and the Government of the Republic of the Philippines (GPH). Alcantara is a known alleged leader of the New People’s Army in Southern Tagalog and is consultant of the NDFP on the peace negotiations. “However, the AFP has been considering him as their prized trophy in their supposed fight against insurgency,” added Enriquez.

Earlier, Karapatan called the attention of the Assistance and Visitorial Office (AVO) of the Commission on Human Rights (CHR) on the plight of Alcantara, particularly his solitary confinement in a military unit inside Fort Bonifacio. “At this time that this supposed “new” administration has been declaring itself as pro-human rights, the solitary confinement of a person widely known as a political dissenter constitutes a grave violation of Mr. Alcantara’s rights as a political prisoner. Mr. Alcantara was arrested without warrant on January 4, 2011, at a time that informal talks were underway and as a JASIG-protected person, his arrest was already a violation of an international agreement signed by a sitting government,” said Hilao-Enriquez in the said letter sent to the CHR.

In June, Alcantara issued a sworn statement that outlined his deteriorating health condition and the ill-treatment inside prison he is being subjected to such as dirty food ration (with trash, broken pieces of glass and fecal matter); water that tasted like ‘menthol’ that caused him vomiting and loose bowel movement and restrictions on visits. There was also a nurse who pretended to be a doctor who gave him a medicine that caused nausea, palpitations, terrible pain on his neck.

“GMA’s freedom is like a salt on our wounds. It is disgusting enough that GMA spent ‘detention’ in a comfortable room in a hospital. But we are more appalled by the fact that people who fought against her abuses and crimes are in jail while she is now free,” said Hilao-Enriquez.

Karapatan reiterates its call for the release of all political prisoners specifically through a general, unconditional and omnibus amnesty. It also calls on the Aquino government and all its concerned agencies to “investigate and act on Alcantara’s complaints of human rights violations; and recommend his immediate transfer to a regular detention facility while awaiting his eventual release.” ###