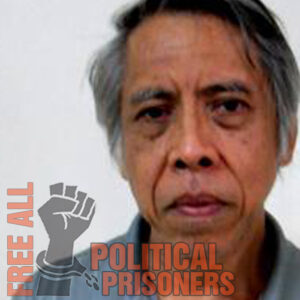 Marie Hilao-Enriquez, chairperson of Karapatan slammed the move “because it reeks of treachery. Alan Jazmines was not even allowed to call his legal counsel and the Custodial Center has not provided any reason for the haste in Jasmines’s transfer.”

“The chairperson of the Commission on Human Rights (CHR) should likewise answer for the PNP’s action. We learned that she was with Supt. Cesar Magsino, chief of the PNP Custodial Center, when Jazmines was transported to Bicutan. The CHR chairperson could have at the very least facilitated Jazmines’s request to talk to his lawyers,” added Hilao-Enriquez.

Earlier, Karapatan submitted to CHR complaints on the ill-treatment and increasing restrictions of political prisoners at the PNP Custodial Center and at the Fort Bonifacio Headquarters, PA Custodial Center, 191st MPBn., HHSG, PA where Tirso Alcantara, another NDF consultant, remains in solitary confinement for over a year and a half already, in complete violation of RA 7438, the law that supposedly enumerates the rights of a detained, accused person.

Alan Jasminez is among the 14 peace consultants of the National Democratic Front of the Philippines (NDFP) currently detained in various jails in the country, whose releases are being sought for by the NDFP Panel. Ramon Patriarca, another NDFP detained consultant in Cebu experienced a similar treatment. On January 25, 2012 he was, without notice, taken straight to a military stockade in the AFP-Central Command in Camp Lapu-Lapu, Lahug, Cebu City after attending a hearing and did not even have time to pack his things.

In the past, several attempts were made to isolate Alan Jazmines from his co-detainees in Camp Crame. Jazmines recently figured in the news when he wrote a letter to the Department of Justice, CHR and Karapatan saying that “The FBI maintains an office inside the detention center itself and in a unit in a nearby condominium…”