What should we expect from the Aquino regime about the stalled peace talks and the repression of detained NDF peace consultants? 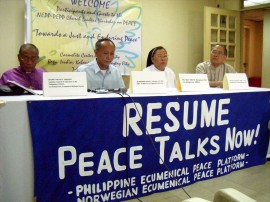 Karapatan Public Info Desk Mar 29 – We wonder if the administration of Benigno S. Aquino III does enough of serious consideration and work to really promote and push the peace talks, and if indeed it really is interested in the peace process at all. Several indications seem to show the opposite.

After the long stalled peace talks between the National Democratic Front of the Philippines (NDF) and the Government of the Republic of Philippines (GPH) were briefly initiated again in February last year, they have been indefinitely stalled again as the GPH continues to renege on its obligations to free NDF peace consultants detained in violation of the standing NDF-GPH Joint Agreement on Safety and Immunity Guarantees (JASIG),which is supposed to protect peace consultants from surveillance, arrest, detention and other antagonistic acts.

Add to that, the GPH has not done anything at all and continues to do nothing in the face of intensified repressions and abuses (including torture) that have been and continue to be committed by the military, police, intelligence and prison authorities against the arrested and detained NDF consultants. These have been constituting not only persistent violations of the JASIG and the earlier NDF-GPH Comprehensive Agreement on Respect for Human Rights and International Humanitarian Law (CARHRIHL), but also persistent slaps by the GPH against those at the opposite side of the negotiation table.

Fascist reprisals and further repression have been the systematic response of state and prison authorities against political prisoners, specially NDF officials and consultants identified to be in the forefront of prison struggles.

Last January 25, without notice to him and his counsel, and without the court (that has been hearing his case and had specifically committed him for detention at the Davao City Jail) even officially knowing it, right from his court hearing that day, Ramon Patriarca, an NDF peace consultant representing the Central Visayas Region, was not returned to his cell at the Davao City Jail, but was instead secretly brought temporarily to the Cebu Provincial Jail and then to a military jail at Camp Lapu-Lapu of the Visayas Central Command of the AFP.

Prison authorities concocted as justification for his sudden transfer his incitement of fellow detainees to rebellion and as a further purported intelligence information of a rescue plan by the New People’s Army.

In truth, his spurious transfer was because of his leadership of fellow detainees at the Davao City Jail in fasts and other forms of struggles for the release of all political prisoners throughout the country as well as for the rights and welfare of all detainees at the Davao City Jail. As a result of their series of prison struggles, the detainees were able to have their food budget doubled from a mere P15/detainee/day toP30/detainee/day.

They were also able to set up an Alternative Learning System (ALS) class and extra review classes participated in by about 50 detainee students, who were able to earn DepEd credits for their studies. Instead of appreciating and assisting in these endeavors, however, prison authorities did all they could to sabotage the projects and wage reprisals against all those who participated in the struggles and resulting projects.

The vast majority of detainees stood firmly in supporting Patriarca and even proceeded to formally elect him to head the leading council of detainees in the jail, despite all-out efforts of prison authorities to block his election and continue to directly appoint their own stooge.

Patriarca’s sole rebellion case has been trumped-up, has crawled at snail’s pace and has dragged on for several years now. The Supreme Court had already ruled in the case filed by Satur Ocampo, Rafael Baylosis, Randall Echanis and Vic Ladlad that rebellion cases are baiIable even if recommended by prosecution to be non-bailable. Yet Patriarca continues to remain in jail.

The military camp where Patriarca has surreptitiously been transferred to is the camp where he was brought to and heavily tortured right after he was arrested in February 2005, and where he was held incommunicado and practically deprived of practically all his rights for four years. He was only surfaced in February 2009 as a result of a writ of Amparo case filed against those who arrested and continued to hide him. His surreptitious and anomalous return to the hands of his torturers and to the camp where he was held incommunicado for several years reprises his hellish experiences there of torture, isolation and deprivation of practically all his rights.

In 2009, Patriarca filed a damage suit for the torture committed against him by those who ordered and perpetuated his torture. In returning him now in the hands of his torturers, the military, police, intelligence and prison authorities have further intensified their intimidation and reprisals against him, especially now as the damage suit he filed for the torture against him is about to be concluded with very convincing testimonies by witnesses, including doctors and psychologists attesting to his torture.

Here at the PNP Custodial Center in Camp Crame, the same attitude is carried and practically the same moves continue to be made ‘by prison’ authorities. They react with the same fascist reprisals when prisoners, especially political prisoners, wage struggles for their rights and welfare and against the atrocities and abuses of police and prison authorities here.

The custodial command here always reacts viciously to statements, letters of protest and complaints against the undue restrictions and
repressive acts it imposes on detainees, especially political detainees. It wages reprisals against prison struggles, especially those led by political prisoners, even if the struggles were only in the form of dialogues sought by the detainees or letters of requests collectively made by the detainees.

There have also been several instances of the custodial center command’s narrow-minded fetish at censoring communications and reading materials, and confiscating even legitimate and publicly available for being “critical of government”. Last December 26, it confiscated all copies of a KARAPATAN primer on Oplan Bayanihan brought for us by our visitors whom it also attempted to prevent from visiting us. The primer criticizes human rights violations by state forces in the field; the confiscation of copies of the primer all the more blatantly depicts how the custodial center command here knows nothing about human rights.

The most vehement reaction recently of the custodial center command has been against the ongoing efforts of political prisoners here to come out with studies and documentations of cases of unjust, arbitrary and illegal arrests, prosecution and detention of practically all political prisoners here, in preparation for a proposed joint investigation by government and human rights entities on those cases. The custodial center command here has been very apprehensive of the repercussions of the proposed joint investigation, and has thus made several attempts to prevent and sabotage it. The custodial center command here has been intensely making reprisal moves against political prisoners here, targeted principally against an NDF peace consultant detained here and identified to be in the forefront of struggles of political prisoners and other prisoners here. It has made several attempts (three so far) to have the said NDF peace consultant transferred to another detention center where he can hopefully be more effectively gagged and further repressed. The transfer moves have so far been averted with the resistance of the one targeted for transfer and the support of other political as well as other fellow detainees and of others from outside of prison.

The custodial center command, however, continues to plot and make reprisals and further repression moves, the most recent of which is the confiscation of old-fashioned typewriters being used by NDF peace consultants detained here. With the confiscation of the typewriters, the custodial center command hopes to hamper or at least greatly slow-down the output of exposes`, statements, letters of protests and complaints and even the studies and documentations of cases of unjust, arbitrary and illegal arrests, prosecution and detention of political prisoners here. But, the bigoted fascist character of the command of the custodial center here is all the more exposed as its bigoted fascist act has added more material to expose`s, statements, letters of protest and the like.

NDF consultants and other political prisoners in other detention centers throughout the country also suffer the same repressive treatment in the hands of military, police, intelligence and prison authorities.

The daily sufferings of another NDF consultant, Tirso Alcantara in the hands of his jailers who continue to keep him in isolation and almost total deprivation in Fort Bonifacio is one of the cruelest.

All such repressive treatment of detained NDF consultants and other political prisoners are rampant gross violations of human rights, peace agreements (including JASIG and CARHRIHL), legal and other rights.

What has the administration of Benigno S. Aquino III done about all these. . . in the interest of promoting the peace process with the NDF? What should we expect?