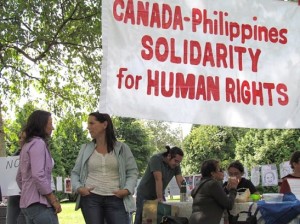 People gathered under the trees, where photographs of the slain and the disappeared,  the stories of their lives, alongside poems and songs written and dedicated to them, were hung.

Fr. Justin Trinidad, led a ceremony calling on all to work for peace and social justice. He lit a candle representing remembrance and the quest to follow the light of justice.  Dr. Chandu Claver of the Victoria-Philippines Solidarity Group and Bayan-Canada chairperson,  urged the people to continue taking action to oppose human rights abuses and achieve justice and indemnification for the victims.  He and his family came to Canada to find refuge from persecution after his wife and mother of their three daughters was ambushed and killed. 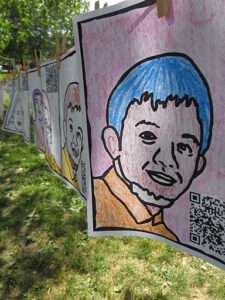 People signed postcards addressed to Pres. Benigno “Noynoy” Aquino for the surfacing of abducted indigenous human rights activist, James Balao.  A petition for the general, unconditional and immediate release of all political prisoners in the Philippines was passed around and signed.

Thousands  of state-sponsored extrajudicial killings and  cases of enforced disappearances committed under the past regime of Gloria Macapagal- Arroyo have yet to be prosecuted and served justice.  Impunity prevails because up to the present, no one has been put behind bars for human rights violations. Now, more than ever, it is important that peace- and justice-loving members of the international community show solidarity with the Filipino people in pressuring the Aquino government to decisively stop human rights violations and end the reigning climate of repression and impunity.