THE YEAR 2007 is a dangerous time for the Filipino people as state terror, impunity in human rights violations and general lawlessness grip the nation. The government of Gloria Macapagal-Arroyo has done little to stop the political killings and disappearances except take token steps to assuage local and international outcry. On the other hand, the year also signals victories in the people’s relentless struggle against political repression and state terrorism as the victims’ clamor for justice and democracy is echoed here and abroad.

There is no clearer picture of the Arroyo government’s iron-fist mindset and utter disregard for human rights than the sight of full-battle-geared policemen and an armored personnel carrier smashing into a tear-gassed hotel lobby to “serve an arrest warrant” to a handful of rebel soldiers and civilians, and afterwards, police
herding in the journalists and broadcasters covering the incident, their wrists strapped, like suspected criminals. 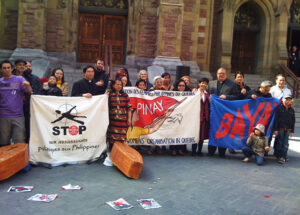 So alarming is the Arroyo government’s propensity for political repression that Philip Alston, United Nations Special Rapporteur (UNSR) for extra-judicial, summary or arbitrary executions, in his November report on the Philippines admonished that “As Commander-in-Chief of the Armed Forces, the President (GMA) must take concrete steps to put an end to those aspects of counterinsurgency operations which have led to the targeting and execution of many individuals working with civil society organizations.” He strongly recommended that, “Extra-judicial executions must be eliminated from counter-insurgency operations.”

In Congress, GMA is besieged with impeachment complaints on the basis of her involvement in scandalous billion-peso government contracts, million-peso bribery of legislators and local government officials right inside Malacañang Palace and gross violations of human rights.