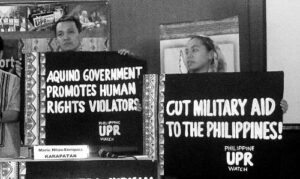 In Mindanao where human rights and fundamental freedoms are systematically violated, where community leaders and pro-reform organizations work amidst the climate of impunity, and are persistently threatened and violently repressed, the UN experts’ call for the authorities to carry out prompt, impartial and independent investigations into the growing number of threats and killings of rights defenders to hold perpetrators to account is urgent.

We affirm the observation of UNSR on extra-judicial killings, summary or arbitrary executions, Christof Heyns, that many of the death threats and killings taking place appear to be perpetrated by paramilitary groups, as in the case of indigenous leaders and anti-plunder advocates Mampaagi Belayong of Esperanza in Agusan del Sur and Alvie Binungkasan of Gingoog City in Misamis Oriental who were both killed in the last quarter of 2009; of Arpe Belayong and Soltie San-ogan of Esperanza, Agusan del Sur on 30 June 2011; and of Jimmy Liguyon of San Fernando, Bukidnon on 5 March 2012. With this reality from the Mindanao grounds, we are again urging the Aquino government to disallow the use of paramilitary as investment defense forces.

Justice is still elusive for the friends and family of indigenous peoples’ rights advocate of fellow RMP-member Father Pops Tentorio who was killed on October last year.  The orphaned family of anti-dam leader Margarito Cabal of Kibawe, Bukidnon killed last April continues to live in insecurity and uncertainty. We commend the efforts of the New York-based Human Rights Watch that publicized the series of killings in Mindanao, and we criticize Malacanang’s denial as promotion of further impunity.

As members of the RMP living with the rural poor and joining them in their aspiration for the realization of land rights and access to common goods, we call the UNSRs to further urge the Aquino government to allow them to visit the country and for international human rights organizations to conduct further investigations in Mindanao grounds. In farming and indigenous communities with land issues, gatherings are strictly monitored.  Leaders are put under surveillance, sometimes ‘invited’ to the military camps for questioning. In farms owned by transnational companies, farmer-victims of land grabs who have been reduced to mere agricultural workers have been prohibited to form or to join unions, and the right to expression and to peaceful assembly, and the right to protest have been curtailed.

Furthermore, we make the statement that these civil and political rights curtailment are only consequences of the rural communities’ assertion for their economic, social and cultural rights.  They have fought hard against the government’s anti-poor policies favoring rich companies over the basic rights of its constituencies to work, eat and live.  And in reaction to their resistance, they are met with state and state-supported violence.  We call on for support for the protection of both the communities’ civil and political rights and their economic, social and cultural rights for one could not exist without the other.

We commend all Mindanao organizations that have brought these human rights violation issues to the international community. These incidents have been downplayed, dismissed as insignificant by the local and national government offices.  If not for the collective efforts of the organizations, a spiral of silence in these gravely abused communities will continue.  Even at the present, the Armed Forces of the Philippines is once more trying to conceal it by redirecting the focus to their propaganda against the communist New Peoples Army.  It is their futile attempt to evade answering directly the issues thrown against them.  Additionally, even as we tire of repeating ourselves, we reiterate that our responsibility is to see to it that they, the government and its armed forces as primary duty bearers, satisfy their role to protect and respect and fulfill the rights of the people.  We are appalled by the present situation where they, the duty bearers, the supposed protectors of human rights, are the ones violating it.

Our island is not alien to violence.  For centuries, it had been the land of solid resistance against the colonial aggressors – earning the reputation of being the land of barbarians and juramentados.  But for us who have been working in these communities who have only been asserting their right to live, it is the land of the brave.  Unfortunately and lamentably, the present administration only continued the vicious scheme of the previous administration.  It continues to support the use of brute and violence to force its so-called development projects on the peoples only hoping to live decently.

In President Aquino III’s coming third State of the Nation Address, we are sure the dire human rights situation in our island will be covered again by declarations of economic growth and progress.  For us, these are only statistics that mean nothing to a poor population that is growing hungrier by the minute.  Economic growth is meaningless to a family grieving for the loss of a father, a child, a brother or a sister.  We continue to maintain our call for justice – justice for the blood-drenched Mindanao, justice for the indigenous peoples who have for decades been considered illegal settlers in their own lands, justice for the farmers who could not afford the fruits of their hands.