Rights violations under GMA and Palparan continue to surface 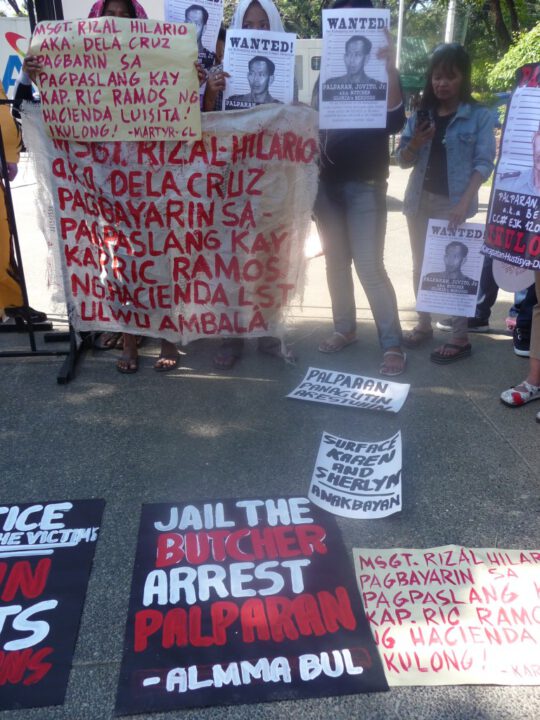 The more than a thousand cases of extrajudicial killings and hundreds of disappearances, and other rights violations cases documented under the Gloria Arroyo regime may be smaller than the actual incidents that happened, said Karapatan. “Some victims and their relatives are only able to report now out of fear of military reprisal because the military have not left their communities. But as these state-sponsored atrocities continue to happen under P-Noy’s watch, the victims and relatives have no other choice but to speak out now,” said Marie Hilao-Enriquez, chairperson of Karapatan.

Hilao-Enriquez said that cases of human rights violations continue to surface as victims recall for the first time the terror they experienced under GMA and her favorite butcher Gen. Jovito Palparan, one of the main implementers of Oplan Bantay Laya. “We have specifically documented cases as far back as 2004 involving farmers in Hacienda Luisita. At that time, Tarlac was among the seven provinces targeted by Palparan, then commander of the 7th Infantry Division,” said Marie Hilao-Enriquez.

Aside from the publicized killings, among the cases documented in a fact-finding mission in Hacienda Luisita from 2004 to 2010 were:
surveillance, threat, harassment, illegal arrests and detention, and intimidation. The victims were mostly leaders and members of Alyansa ng mga Manggagawang Bukid sa Asyenda Luisita (AMBALA) and the United Luisita Workers’ Union (ULWU). During this period, 300 soldiers from several units under Palparan’s 7th ID were deployed in the villages of Hacienda Luisita.

Other provinces affected were Bulacan and Nueva Ecija where cases of suicide because of fear of military presence and harassment are publicly known but remain undocumented.

Lito Bais, President of ULWU, was among the leaders who were frequently visited by soldiers. Bais now face charges of ‘grave coercion’, along with 22 other farmer-leaders in Hacienda Luisita as they continue to assert their right to own the lands in Hacienda Luisita.

Sgt. Rizal Hilario was specifically identified by the victims. Hilario was Palparan’s right hand man at that time. He is Palparan’s co-accused in the kidnapping and serious illegal detention case of Sherlyn Cadapan and Karen Empeno. Both remain fugitives, three months after they were issued warrants of arrest by the Malolos Regional Trial Court.

The unresolved land dispute in Hacienda Luisita; the continuing harassment of Lito Bais and other hacienda workers from Arroyo to Aquino; of Palparan and Hilario who remain scot free despite their crimes against the people; of Gloria Arroyo landscaping at the Veteran’s Memorial Hospital instead of being jailed in regular prison—exemplifies how rights violations and impunity continue under the P-Noy government. “It only shows that GMA’s bloody Oplan Bantay is extended in P-Noy’s Oplan Bayanihan. Oplan Bantay
Laya is out but terror continues through P-Noy’s Oplan Bayanihan,” concluded Hilao-Enriquez.