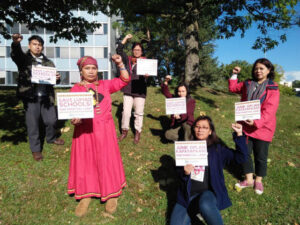 Amid the Philippine government’s continued denial of the existence of extrajudicial killings and the culture of impunity in the Philippines before United Nations processes, the Philippine UPR Watch, a delegation of victims of rights violations, ecumenical leaders, and human rights defenders who participated in the UN sessions in Geneva, Switzerland, called for the removal of the Philippines as a member of the UN Human Rights Council.

“Throughout the three cycles of the Universal Periodic Review, and most especially during the Duterte regime’s participation in the process, the Philippines has exhibited a total mockery of international human rights mechanisms,  with the government’s blatant distortion of facts on extrajudicial killings and human rights violations in the country, its record of using the UN as a platform to justify its crimes against the Filipino people, and its doubletalk on compliance to human rights instruments. We call on the UN to revoke the membership of Philippines at the UN HRC, especially as it continues its hardheaded position against any UN investigation on the killings,” said Philippine UPR Watch.

The group said the recent statements of presidential spokesperson Ernesto Abella and Foreign Affairs Secretary Alan Peter Cayetano are no different from the Philippine government’s statements during the past two UPRs during the Macapagal-Arroyo and Aquino III regimes. “Through similar lines and sound bites, they have all painted a rosy picture of the human rights situation in the Philippines, while on the ground, the situation is getting worse for communities, with the drug war, the martial law in Mindanao and the continuing implementation of counter-insurgency programs,” they added.

Philippine UPR Watch also welcomed the statement of the thirty-nine states led by Iceland, that expressed concerns on the extrajudicial killings in relation to the drug war and rights violations against human rights defenders, indigenous peoples and journalists.

“The statement disproves the so-called win of the Philippine government at the UNHRC. We call on these States to withdraw their financial support, if any, for the Philippine National Police and the Armed Forces of the Philippines, and other programs that abet the human rights violations and the Filipino people, lest the peoples’ money from these countries will be used to further worsen the current situation,” the group emphasized.

Philippine UPR Watch reiterated its call to the international community to keep watch on the worsening climate of impunity in the Philippines and to provide support for the Filipino people’s campaign against Duterte’s tyrannical acts.#