Quick Facts on the Killing of IP Leader Gilbert Paborada

Victim: Gilbert Paborada, 47 years old, married and with one 7-year old child, originally from the sub-village of Bagocboc, in the town of Opol, Misamis Oriental
Case: Extra-Judicial Killing
Date of and place of incident: past 3pm, 03 October 2012, San Nicolas, Puntod in Cagayan de Oro City 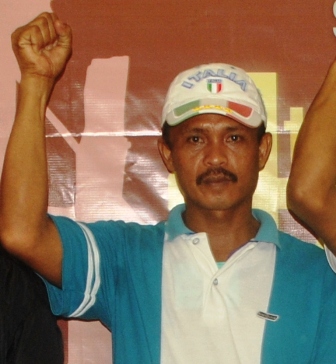 According to the witnesses, Paborada had just came back from the village of Bagocboc for some concerns to San Nicolas, Puntod in Cagayan de Oro when 2 motorcycle-riding men of heavy built shot him when he went down from a motorela (public tricycle) he was riding past 3pm. Before the gunmen left, witnesses claim that one of them moved closer to Paborada and shot him again at the head. The gunmen used a white motocross-type motorcycle.

Paborada sustained 5 gunshot wounds (not 8 as earlier reported), believed to be bullets coming from .45 caliber pistol.Two of the bullets that killed him were found in his chest area, 1 in the abdominal area near his kidney, 1 in his hand, and the other 1 in his head. He was dead on the spot.

Paborada is the chairperson of Pangalasag (Indigenous Shield), a community-based indigenous organization resisting oil palm plantation expansion of A. Brown in the town of Opol, Misamis Oriental. Aside from accusing A. Brown of grabbing their lands, they complained of  company-sanctioned violations of their civil and political rights(see link: http://www.rmp-nmr.org/index.php/recent-releases/196-they-took-our-land-by-force).

Paborada left Bagocboc on March 2011, and relocated in Puntod to evade threats against his life. He earned a living by opening a small store attached to his house in the slums of Puntod. He fequented Bagocboc to lead community-based campaigns of Pangalasag as the chairperson.