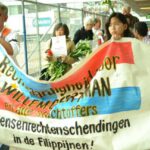 A protest picket/vigil was held at the Philippine Embassy in The Hague, The Netherlands today, 6 July, to condemn the killing of Dutch national Willem Geertman, and to demand swift justice from the government of President Benigno Aquino III.

The action, which was organized by the Justice for  Willem Geertman Campaign, was attended by representatives of different advocate, solidarity and migrant organizations which banded together for the justice campaign. 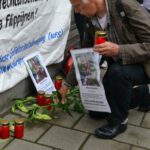 Theo Droog, chairperson of the Nederlands-Filippijns Solidariteitsbeweging (NFS, Dutch-Philippine Solidarity Movement) led a delegation that went inside the embassy to talk with the Philippine ambassador and asked the ambassador to deliver their strong letter-petition to Philippine President Benigno Aquino III.

“Because of his involvement with people’s organizations that criticize the government, there are strong suspicions that this murder is politically motivated. 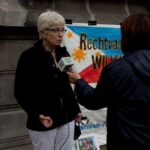 “We call on the Philippine government under Aquino to carry out forthwith a thorough and impartial investigation and to criminally prosecute the suspects.

“We will also call on the Dutch government to do everything possible to bring out the truth so that justice for Willem Geertman can be attained,” the petitioners emphasized.

The Justice for Willem Geertman Campaign explained that the call for an investigation, prosecution and justice “ is all the more compellingly urgent, because under Aquino almost 80 activists have been murdered and there has been no justice for any one of them”. 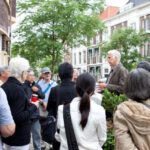 The letter, which was endorsed by the brothers and sister of Willem, was signed by a member of the Dutch Parliament, high-ranking Dutch church leaders and pastors, lawyers, university professors and academics, union leaders, development workers, medical doctors, Carmelite priests, human rights and migrant rights advocates and former Dutch development volunteers in the Philippines. 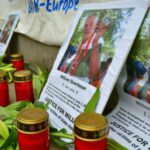 A mural, which says “Rechtvaardigheid voor Willem Geertman en alle slachtoffers van mensenrechtenschendingen in de Filippijnen” (Justice for Willem Geertman and all victims of human rights violations in the Philippines), flowers and candles were mounted in front of the embassy with the photos of Geertman.

A memorial service is scheduled on July 15, Sunday, for all Dutch and Filipino friends, colleagues and relatives of Willem. Details will be announced later. Willem Geertman will be buried Sunday, July 8, in a place in Aurora province that he had called home.