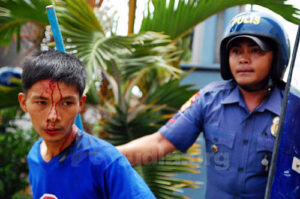 Press Statement, April 24, 2012 – Genasque Enriquez, a Manobo leader from Surigao del Sur expressed sympathy, in behalf of internal refugees or bakwet from Visayas and Mindanao who are in Manila, with the urban poor victims of police brutality in yesterday’s demolition at the Silverio Compound in Sucat, Paranaque.

The bakwet find strong affinity with the residents of Silverio compound as they likened the urban poor situation to the situation of the bakwet. “Here in the urban centers, there is forced eviction of urban poor dwellers in favour of ‘development’; while there is forced evacuation in the countryside, also in the name of ‘development’. Theirs is for commercial purposes for P-Noy’s public-private partnership (PPP); ours is for agri-business plantations and large-scale  mining operations. Theirs is police brutality, ours is military combat operations,” said Enriquez, secretary general of Kahugpong sa Lumadnong Organisasyon (KASALO), a CARAGA-wide organization of Lumad. Enriquez attended, along with 130 others, the conference on Internally Displaced People or internal refugees held in Quezon City.

Karapatan chairperson Marie Hilao-Enriquez also said that, “The everyday life of the ordinary Filipino is hard enough with the unabated high prices of basic commodities and oil, the low wages, the endless demolition and the resulting displacement of urban poor dwellers; the life of internal refugees is doubly hard. It is unimaginable to most Filipinos how it is to be uprooted from the community that is your home from birth.”

Genasque Enriquez added that, “yearly, we are forced to leave our communities, our farms that are ready for harvest; our children had to stop schooling, only to seek shelter in unfamiliar places, sleep in cold cemented floors in gyms, basketball courts or school halls, bear the sweltering heat of makeshift tents; and rely on donated food and medicine. When we go back to our communities all our efforts to build and develop our communities and to secure our children’s future are destroyed. Our harvested crops are thrown out on the roads, our houses and the schools we built are ransacked and vandalized. We are endlessly building and rebuilding our lives amidst the turmoil created by military presence and activities in their lands. Worst, we are treated like dirt by some government and military officials who are sworn to protect our rights as human beings.”

Karapatan has documented more than 6,500 victims of combined forced eviction and forced evacuation from the time P-Noy assumed the Presidency until the first quarter of 2012. According to Marie Hilao-Enriquez, “this number does not include those who were harassed and intimidated; those who were wounded and hit by bomb shrapnel or by the military’s indiscriminate firing, or the number of people, including minor, who were used as guide in navigating the forest areas,  or shield by the military during their operations and the number of schools and other public places which the military used for their purpose.”

Victims of forced evacuation and rights groups also called on the P-Noy government to stop military operations, bombings and airstrikes in the countryside and to immediately pull out military troops, especially in peasant communities and ancestral lands of Moro and indigenous peoples. The delegates of the conference on Internally Displaced People yesterday lit candles along E. Rodriguez Ave. in Quezon City to show their sympathy with the residents of Silverio Compound and express their protest over the reported death of four protesters, scores of wounded and the arrest of at least 33 others. ###